They haven’t even set a date for the big day just yet, but Jennifer Lopez and new fiancé Alex Rodriguez are already in the pre-wedding honeymoon phase. And if that wasn’t already a thing, then it definitely is now. Having shared their highly anticipated engagement news with the world last week, the pair celebrated with a sweet date night in Manhattan on Sunday, looking happier than ever as they linked arms and walked to Italian restaurant, Carbone.

There was also a major third wheel on this date, though, which just has to be acknowledged. Yes, I’m talking about the enormous engagement ring now sitting pretty on J/Lo’s finger, which is so huge that it should definitely be considered a separate entity, and may even have its own orbit if you look close enough.

A-Rod proposed with the rock, which has an estimated value of anywhere between $1-5 million, during a romantic beach break earlier this month. Unsurprisingly, J.Lo is said to be a pretty big fan of her new jewelry, with a source telling PEOPLE: “Jennifer can’t stop looking at her ring. She is obsessed and loves it. She keeps saying that the proposal was the best surprise ever.”

The insider continued: “They were going for a beach walk when Alex asked her to marry him. Jennifer loves that the proposal was so romantic and low-key. She loves that Alex knows her so well and felt comfortable keeping it real instead of going for a flashy proposal. It was a dream proposal for Jennifer. She wouldn’t have wanted it any other way.”

Fresh from their proposal Bahamas vacay, the couple headed straight to NYC for their date night. Lopez and Rodriguez both dressed down for the occasion, with Jennifer styling classic ripped blue jeans with white sneakers, a cream coat and a huge furry stole—as well as a new future hubby. 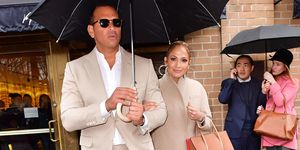 How Jennifer Lopez and A-Rod Met
Lucy Wood Contributor Lucy Wood spends most of her time writing about celebby things, reading books, and waiting for the glorious day that she have enough millions for a pet sloth.
Advertisement - Continue Reading Below
More From Celebrity