After two years of dating, Jennifer Lopez and Alex Rodriguez are officially engaged. The singer confirmed that the former New York Yankee had put a ring on it with an internet-breaking ring shot on Instagram Saturday. Lopez captioned the picture of her giant square-cut engagement ring (set against the beautiful backdrop of a romantic sunset) with nothing but a series of red heart emojis, which was fine since the stunning rock speaks for itself.

In honor of the joyous news of J.Lo and A-Rod's highly-anticipated engagement and of the massive rock with which Rodriguez proposed, we're looking back at Lopez's other engagement rings to see how they stack up.

Let's start with a little run down on J.Lo's latest piece of engagement bling. The ridiculously-large rock has an estimated value of anywhere from $1-5 million.

"I would imagine Jennifer Lopez's engagement ring to have a retail value approaching a million dollars," Andrew Brown, president of WP Diamonds, told E! News. "It looks to be an emerald cut around 10 carats, likely an extremely good stone—VS in color and clarity."

According to Ira Weissman, founder of The Diamond Pro, the ring is probably worth much more, however.

"This approximately 20 carat emerald cut diamond is exquisitely cut and of superb quality," Weissman said. "When you have an extremely rare and timelessly breathtaking stone such as this one, the goal of the ring should be to show off the rock naturally with as little embellishment as possible—the perfect compliment to the ageless enduring beauty of J.Lo. The ring is worth approximately $5 million dollars."

Lopez's first marriage was in 1997 to Onjani Noa. The couple were married until 1998 and the engagement ring he bought J. Lo is thought to have cost six figures at the time.

Lopez was married to backup dancer Cris Judd from 2001 until 2003 and Judd reportedly proposed with an emerald cut rock valued in the six-figures.

During the Bennifer Era, in 2002, Lopez got engaged to her Gigli costar, Ben Affleck. Affleck proposed with an iconic pink, 6.1 carat, Harry Winston ring worth an estimated $2.5 million. The couple put their wedding plans on hiatus in 2003 and never ended up walking down the aisle.

From 2004 until 2014, Lopez was married to fellow musician Marc Anthony, who proposed with an 8.5 blue diamond Harry Winston engagement ring worth an estimated $4 million. 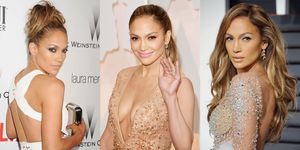 Photographic Evidence That J.Lo Never Ages
Kayleigh Roberts Contributor Kayleigh Roberts is the weekend editor at Marie Claire, covering celebrity and entertainment news, from actual royals like Kate Middleton and Meghan Markle to Hollywood royalty, like Katie Holmes and Chrissy Teigen.
This content is created and maintained by a third party, and imported onto this page to help users provide their email addresses. You may be able to find more information about this and similar content at piano.io
Advertisement - Continue Reading Below
More From Celebrity
People Are Devastated by Britney's Revelations
Britney Spears on "Abusive" Conservatorship
Advertisement - Continue Reading Below
'Too Hot to Handle' S2 Was Filmed In Paradise
About That "Sexy Nerd" From 'Too Hot to Handle'
Prince Charles Is Leaving London When Harry Visits
What Happens on Katie's Season?
Meghan Wrote a Book When She was in Eighth Grade
Irina Pairs Her LBD With a White Shirt and Sandals
A-Rod Explained Why He Was Spotted With Ben's Ex
Selena Felt "So Less Than" in Past Relationships