After this year's Sundance Film Festival, Netflix bought the rights to the Ted Bundy biopic Extremely Wicked, Shockingly Evil and Vile, reportedly for a whopping $9 million as reported by Deadline. Great news, right? So when can we watch it?

First, some context. We first got a look at Zac-as-Ted in January 2018, when Zac posted a photo, captioning it, "Meet Ted." And it was insanely creepy. The trailer that came out earlier this year was also deeply unsettling, with the former heartthrob channeling the remorseless sociopath with absolutely meticulous precision.

Update, 4/1: Netflix gave us the release date! And it's even sooner than we thought! This is great news, in my opinion. On May 3, subscribers will be able to watch the film, although it's not entirely clear whether there will still be a theatrical run, as predicted by Jeff Sneider and Screen Rant. Who knows—we might still see the film in theaters in the fall? We'll update the page as we know more.

Original post: Some who saw the film at Sundance deemed it controversial—saying that covering Bundy at all was in effect glorifying him, even if the portrait was unflattering—but it apparently gives an honest look at what Bundy did and a look at the charisma that helped him get away with it for so long.

It's unclear whether Netflix is trying to distance itself from its own Ted Bundy documentary, Conversations with a Killer: The Ted Bundy Tapes (which is very good, if you're interested in the subject). For whatever reason, Netflix hadn't officially set a release date yet (as of 3/29/19), although rumor is it'll get a theatrical run at some point. So in essence, we don't totally know yet.

However, entertainment reporter Jeff Sneider, who called that Netflix would acquire the rights to Extremely Wicked in the first place, tweeted that the film would come out in the fall timed for award season. Fall could, of course, mean anything from late September through December, but a lot of awards season films come out in November or December. So it's a bit of time to wait, but that's the best way to build anticipation, right?

CALLED IT! After creating a Ted Bundy frenzy with its doc series, Netflix has acquired Zac Efron's Bundy movie EXTREMELY WICKED, SHOCKINGLY EVIL and VILE for roughly $9M. It'll come out this fall & will get an awards-qualifying run in theaters. Zac Efron, Oscar nominee?

Screen Rant is backing up that timeline as well, so in absence of an official announcement, "fall 2019" sounds like a good prediction.

Also, Netflix also released a new trailer, and it looks TERRIFYING. Even if the film got mixed reviews, Zac is clearly working very hard to obtain the right balance of charismatic, menacing, and threatening to his performance. The film also paints Lily Allen's Liz Kendall as another victim of the sociopath's impressive charm and manipulation.

Zac shared the release date to fans, saying, "Can’t wait for you guys to see this." And Lily Collins responded in the comments immediately, saying, "Here we go!!!"

Lily followed suit by posting the trailer and a poster, which looks like it might be new (as well as so so so creepy):

So both actors are clearly proud of their performances and the finished product.

I'm definitely interested in watching, if only for the fact that I've found Zac's choices to be intriguing and smart over the years, and he looks...EXACTLY like Ted Bundy.

Seriously, it's uncanny. It's no surprise he dyed his hair BLEACH blond for the Sundance premiere.

Probably a good idea to distance yourself from the character a bit. Good call, Zac! 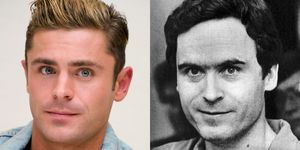 Zac Efron Is Playing Serial Killer Ted Bundy
The First Photo of Zac Efron as Ted Bundy Is Here
Katherine J Igoe Katherine’s a Boston-based contributing editor at Marie Claire online who covers celebrity, fashion, entertainment, and lifestyle—from “The Bachelor” to Everlane to Meghan Markle.
This content is created and maintained by a third party, and imported onto this page to help users provide their email addresses. You may be able to find more information about this and similar content at piano.io
Advertisement - Continue Reading Below
More From New On Netflix 2021: What To Watch Now
The Locations in 'Who Killed Sara?' Are Gorgeous
Get in the Spirit By Streaming a Holiday Movie
Advertisement - Continue Reading Below
Classic Movies You Can Stream on Netflix Now
What Happened to the 'Chicago 7' After the Trial?
The Saddest Romance Films on Netflix
The Scariest Movies on Netflix
Fans Are Clamoring for a Second Season of 'Away'
The Best Halloween Movies on Netflix
Meet Your New Favorite Dating Show
The Best Romantic Movies for Every Vibe