This is about to be a very important time for the British royal family—the most obvious of which is the imminent royal baby from Meghan Markle and Prince Harry. But there's another, smaller moment that's equally important: Prince Louis's first birthday on April 23. And Prince William might miss them BOTH this year.

In this case, there's a very, very good reason for it. William was asked by the prime minister of New Zealand to come to the country in the wake of the horrific Christchurch mosque shootings of only a few weeks ago.

Per the official announcement, "The Duke of Cambridge will meet with those affected by the Christchurch attack and will pay tribute to the extraordinary compassion and solidarity that the people of New Zealand have displayed in recent weeks."

I suspect that, at least in the case of Louis's birthday, they may have a separate celebration. For context: Just this past January, it was reported that George and Charlotte would miss Kate Middleton's birthday (or at least part of it) because they were at school. Then Prince William ALSO had a royal engagement that day. Frankly, I think that meant she had a lovely, relaxing holiday with fewer shrieks and bangs than usual—you KNOW George is rambunctious—and then a lovely family dinner.

Furthermore! Later that month it was revealed that Kate DID have a small event for her birthday some time after the day itself, and Harry and Meghan were nowhere to be found. But apparently there was no rift, just a case of Kate wanting to chill with some friends. So it's pretty common for the hectic royal schedule to cause some scheduling snafus.

So what's potentially likely is that Louis's birthday will simply be "postponed" until everyone can be there. The royal baby is a bit trickier—hard to control when someone goes into labor—but William will probably just be called on a secure line like the Queen to get the official word. Besides, the more important rendez-vous is between the kids. How will George, Charlotte, and Louis react to their new cousin??

HOWEVER. I think William might want to bring back some stuffed kangaroos or something for all the cute little babies that are missing him while he's away.

Here's the official request for William to visit:

The Duke of Cambridge will visit New Zealand on behalf of The Queen to honour the victims of the Christchurch mosques terrorist attack.

The visit in late April will be made at the request of the Prime Minister of New Zealand. pic.twitter.com/rFPlDo8dmJ

And after a tragedy like that, it makes sense that he should be there. Should you want to show support for the Christchurch bombing victims and their families, we have a list of potential resources.

Related Stories
How Meghan's Life Will Change When William is King 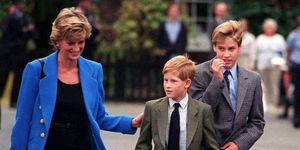 Princes William and Harry Pay Tribute to Diana
Katherine J Igoe Katherine’s a Boston-based contributing editor at Marie Claire online who covers celebrity, fashion, entertainment, and lifestyle—from “The Bachelor” to Everlane to Meghan Markle.
This content is created and maintained by a third party, and imported onto this page to help users provide their email addresses. You may be able to find more information about this and similar content at piano.io
Advertisement - Continue Reading Below
More From Celebrity
The Queen Was by Prince Philip's Side When He Died
Prince Harry Is "Really Upset" Over Philip's Death
Advertisement - Continue Reading Below
Will Harry & Meg Attend Prince Philip's Funeral?
The Queen Is Hopeful Prince Harry Will Return Home
Prince Charles Visits the Queen at Windsor Castle
Harry & Meghan React to Prince Philip's Death
Prince Philip Will Not Have a State Funeral
What 'The Crown' Got Wrong about Prince Philip
Touching Things Queen Has Said About Prince Philip
Your Guide to the Current Royal Line of Succession