Game of Thrones will go down in history as a pop culture phenomenon and a huge critical and financial success for HBO. The network has funneled dump trucks full of money into the series over the course of its eight seasons. With a huge ensemble cast, some of those metaphorical dump trucks have been filled with actors' salaries—but not all of the main cast members are paid the same.

When asked about the discrepancy between her salary and that of her onscreen "brother" Kit Harington, Sophie Turner told Harper's Bazaar UK that the issue is "a little tricky."

"Kit got more money than me, but he had a bigger storyline," she explained. "And for the last series, he had something crazy like 70 night shoots, and I didn’t have that many. I was like, 'You know what... you keep that money.'"

It's also worth noting that Game of Thrones pretty famously tiers its cast's salaries and that Kit and Sophie are in different tiers on that scale. The highest paid group includes Emilia Clarke, Nikolaj Coster-Waldau, Peter Dinklage, Kit Harington, and Lena Headey all of whom have played arguably the biggest roles in the series since the beginning. Sophie and fellow Stark sister Maisie Williams are in the so-called "B" tier and earn less than the five "A" tier actors. 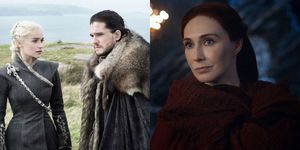 Who Is Azor Ahai on 'Game of Thrones'?
Kayleigh Roberts Contributor Kayleigh Roberts is the weekend editor at Marie Claire, covering celebrity and entertainment news, from actual royals like Kate Middleton and Meghan Markle to Hollywood royalty, like Katie Holmes and Chrissy Teigen.
This content is created and maintained by a third party, and imported onto this page to help users provide their email addresses. You may be able to find more information about this and similar content at piano.io
Advertisement - Continue Reading Below
More From Celebrity
Marvelous Women Scarlett Johansson & Florence Pugh
Gigi Shares Glimpse at Baby's Wardrobe
Advertisement - Continue Reading Below
Matthew McConaughey and His Son Are Twinning
Ashley Graham Opened Up About Sex After Childbirth
Brad Pitt and Nicole Poturalski Have Broken Up
Chrissy Teigen Shared a Sweet Video With Luna
EmRata Displayed Her Bump in an Open Button-Down
Harry Sent a Legal Warning Over "False" Article
Chrissy Teigen Talked About Her Baby Loss Photos
Chrissy Teigen Opens Up About Her Loss