Today's Top Stories
1
Padma Lakshmi and the Art of South Indian Cooking
2
Professional-Grade Kits for Gel Nails at Home
3
Single Parenting and the Pandemic? No, Thanks.
4
Top and Skirt Sets That Make Getting Dressed Easy
5
'Palm Springs' Reboots the Rom-Com
HBO

Spoiler alert for Game of Thrones season eight. We still have five episodes left of the last season of Game of Thrones, and the dead are coming fast. The creators aren't giving anything away, but this may mean a long, extended fight with the Night King and his army of wights (undead zombies) and fellow White Walkers (creepy white-skinned monsters that used to be human). It's going to be a hellish road to get rid of them—if at all—but there's a fan theory out there that indicates we might have caught a glimpse at how the living characters will ultimate prevail.

All right, so first a little context. The pivotal moment we're talking about from the premiere is right as Tormund Giantsbane, Dolorous Edd, and Beric Dondarrion (flaming sword FTW!) come across "the Umber boy" we saw earlier in the episode asking for supplies to marshal his men. The poor little one is dead, mounted up on the wall against a creepy spiral pattern of body parts—way to go with the extremely eerie-beautiful visuals, White Walkers—and then opens his pale blue eyes, shrieks like a harpy, and is swiftly set on fire.

(shrieks incoherently for a few seconds) Ok, got it. So why is that important?

According to Redditor zyuko22—fun fact: Reddit is the source of amazing GoT fan theories and discussion—we last saw that same spiral pattern, made out of a spiritually powerful Weirwood tree and stones, when the very ancient creatures Children of the Forest created the first White Walker. There's another common Children of the Forest/White Walker symbol, a circle with a line through it, that's come to represent (theoretically) God's Eye, a lake in Westeros that's filled with Weirwood trees.

The theory is that this spiral pattern from the premiere represents the "Grand Weirwood Tree, a sort of 'heart' of all the Weirwoods in Westeros," and the source of the Night King's power. When Beric set that spiral on fire, it could be a hint that the main characters will have to burn the Grand Weirwood Tree in God's Eye in order to destroy the true source of the Night King's power. I know it's complex, but the point is—perhaps we learned about the origin of the White Walkers for an important reason, because the old, evil magic is going to need a powerful, old remedy.

I like this theory for a few reasons. 1) dragons! Fire-breathing dragons! They have all the fire they need! 2) this is a lot more positive than the theory that the spiral means the Night King is a Targaryen, 3) the Children of the Forest seem like they're bound up in the lore of the White Walkers, so it makes that old magic is involved, and 4) the Night King is going to be bloody impossible to kill so it makes sense that something profoundly powerful needs to happen in order to kill him. You know a Valyrian steel sword might not cut it, terrible pun intended.

Reasons I don't like this theory: If burning the Weirwood gets rid of magic, does it get rid of ALL magic? What happens to the dragons and other magical creatures? Does Jon go back to being dead if magic is keeping him alive?

Also, now the question becomes: If this is true, how do the characters figure all this out?

If they get through, everyone dies #ForTheThrone.

Basically, TL;DR: The source of the Night King and White Walkers' power could be in the Weirwood trees—and burning them may kill them for good.

Related Stories
Jon Snow's Direwolf is Coming Back to GoT 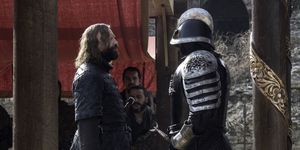