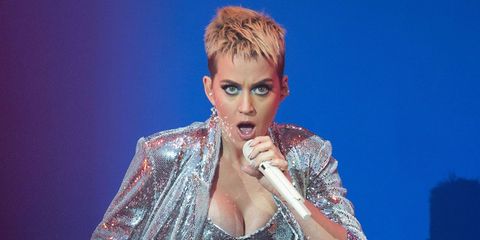 Ranking ex-lovers might seem slightly shady, but faced with eating a rancid, fermented egg or ranking ex-lovers Diplo, Orlando Bloom, and John Mayer from best to worst in bed, Katy Perry went for the latter. And we can't really blame her.

The singer was taking part in a Big Brother-style livestream over the weekend to promote her new album Witness, during which she played a round of "Spill Your Guts or Fill Your Guts" with James Corden.

After making jokes about the size of Orlando's hefty paddleboard package, Corden asked: "From best to worst in bed—this is working on the notion that they're all good—John Mayer, Diplo, and Orlando Bloom?"

"No! No! NO! I will not do that! They're all amazing lovers, and I want to have sex with them all after I get out of this place!" Katy protested, adding: "Is Josh Groban in there? Just kidding!"

When James admitted he never knew that Katy and musician Josh had dated, the star went on to reveal: "He's amazing. People who say who's the song The One Who Got Away about, that's Groban. He's one of my good friends."

But back to the burning question: Is Orland Bloom better in bed than John Mayer?

James kindly offered to help Katy out with the question, as she clearly wasn't planning on eating a 1,000-year-old egg, and suggested: "I think Diplo's third because I think there's a reason people become DJs...So let's go Diplo, and then Mayer, and then Bloom."

But when Katy shook her head in disagreement, James corrected himself and announced: "Bloom, then Mayer. But we're saying they're all exceptional."

Top three or not, nobody wants to be Diplo right now...