Dua Lipa has been dating model Anwar Hadid—yes, he's brother to Gigi and Bella—for a few months now, and the couple have reportedly taken a pretty big step in their relationship. As Cosmopolitan reports, both were already looking to move to New York: Dua to finish her second album, and Anwar to be closer to his family (cute!) And so, they made a major decision: Why not just move in together?

An anonymous source told the Sun, "Dua and Anwar are spending all of their time together so it just made sense for them to rent this place. She’s always at his when she’s in LA and he stays with her in London, so this felt like the natural step."

"Once she comes back with new music she will spend more time in New York so it’s good for her to have a base there and it makes sense to him because a lot of his family live there," the source continued. "Dua visited last month and met up with his family. They really like her and she feels solid with Anwar." Again, cute!

Anwar hasn't appeared much on Dua's social media—though on her birthday, she posted an Instagram story in which she kisses him on the cheek—and her comments in a recent British Vogue interview might explain why. Dua does social media "in bite sizes," she told the magazine. "Social media has always been around for my generation, so for me it’s really fun to post pictures, tweet and update. But I’ve also received a lot of backlash for talking about political things close to my heart. I’m not one to say sorry, I like to stand by things I believe in, so sometimes I delete the app so I don’t start second guessing myself. Trolls can very easily give you anxiety."

"The thing that keeps me on social media—and this is more Twitter than Instagram—is my connection with my fans. They’re the reason why I download the app again, so I can talk to them. It’s the foundation that we’ve built everything on," she continued. "My fans know me so well now that I get messages saying, 'We know you need some time out from Twitter, we just wanted to tell you we missed you.' It’s like everything in life; it’s about finding and maintaining a healthy balance." That's some solid advice from Dua! 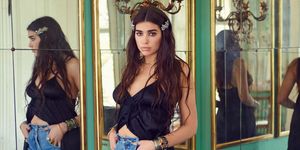 Meet Dua Lipa, the Music Industry's Next Obsession
Gigi and Bella Matched at the MTV VMAs
Emily Dixon Emily Dixon is a British journalist who’s contributed to CNN, Teen Vogue, Time, Glamour, The Guardian, Wonderland, The Big Roundtable, Bust, and more, on everything from mental health to fashion to political activism to feminist zine collectives.
This content is created and maintained by a third party, and imported onto this page to help users provide their email addresses. You may be able to find more information about this and similar content at piano.io
Advertisement - Continue Reading Below
More From Celebrity
The Palace Just Shared Prince Louis Birthday Pic
Meghan and Harry Talked Every Day During UK Trip
Advertisement - Continue Reading Below
J.Lo Wishes A-Rod's Daughter a Happy Birthday
Irina Shayk Shared a Rare Photo of Her Daughter
John Travolta Talked Dancing With Princess Diana
Meghan Markle and Archie Speak to the Queen
Who Is Alexandria Ocasio-Cortez's Partner?
Did Charles, Harry, and William Mend Relationship?
The Kardashians' Most Body-Confident Nude Shoots
Chrissy Teigen + Meghan Markle Spoke About Loss