Things appear to be going absurdly well for Katy Perry and Orlando Bloom. After rekindling their relationship a year after their 2017 breakup, the pair are now inseparable. Bloom and Perry got engaged in February, at which time he gave her a stunning ring ruby and diamond ring. And now, as Perry and Bloom plan their wedding (and the rest of their future together), they’re already beginning to think about babies!

During an appearance on The Howard Stern Show on SiriusXM’s Howard 100 channel, Bloom was asked if he wants to have any more children. His response? “We are shooting for that,” he confessed. “It’s like this wild mustang. If we can just wrangle this beast and get on it, we’ll have the ride of our life.” Uhh, I’m not totally sure what that weird verbiage means, but we did get the green light for more Bloom babies. How exciting!

In case you forgot, Bloom has an 8-year-old son named Flynn with his supermodel ex-wife, Miranda Kerr, and it’s really sweet that he’s looking to expand his brood with Perry. But despite Bloom’s baby fever, it’s pretty unlikely that kids will happen right away.

Right now, Katy and Orlando are trying to work on their relationship as much as they can before they walk down the aisle, so it’s safe to assume they’ll take the same careful approach before having children together. “I think we’re doing really great, and we’re really doing the hard work and laying a beautiful foundation before we start to build a monster house, metaphorically,” Perry said of her relationship in July.

Of course, there’s always the possibility that a baby might come before a Perry-Bloom wedding, but who knows! In the meantime, the paps will certainly be on bump watch. 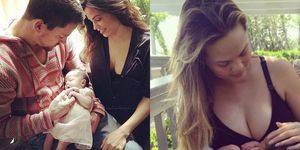 16 Celebs' First Pictures of Their Babies