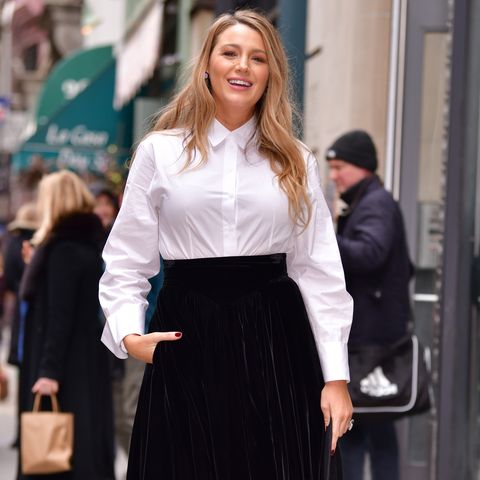 I might not be able to relate to this as a human parent, but I certainly can as a parent to a very clingy cat: Blake Lively works out with her kids, she told Vanity Fair, often using them as living, breathing equivalents to weights. And yes, she probably means she exercises while carrying them on occasion, and not that she performs bicep curls with a human child in each fist, but I'm choosing to believe the latter because it's significantly better.

Lively spoke to Vanity Fair about her daily routine while filming her latest movie The Rhythm Section, and it sounds positively exhausting. "On an average day on set, I probably woke up at 5 a.m., but mostly because I was doing mama duty with my girls. Have breakfast with them, hang out with them, work out with them," she said. "Cause I didn't want to to wake up any earlier. I'm not Dwayne 'The Rock' Johnson. I had to just get some sleep."

"So I would actually wake up and work out with my girls," she explained. "So I would sort of use them as weights. Instead of wearing a weight vest, I got to wear my children."

Evenings while filming, for Lively, involved less small human weights, and more singing while folded into a crib with said small humans. "My kids, they don't ever go to sleep, honestly. We gotta invent something," she said. "My kids had, like, a pack-and-play—almost like a crib—and I would crawl in there and sing them to sleep, and usually I'd fall asleep in there. Almost every single night I'd fall asleep in there."

Relief came in the form of Ryan Reynolds, Lively said. "And then my husband would usually come in and be like, 'Hey, you're safe now. You can come to bed.'" I'm completely depleted of energy just reading this, Blake! Maybe I should go back to bed?


Emily Dixon Emily Dixon is a British journalist who’s contributed to CNN, Teen Vogue, Time, Glamour, The Guardian, Wonderland, The Big Roundtable, Bust, and more, on everything from mental health to fashion to political activism to feminist zine collectives.
Advertisement - Continue Reading Below
More From Celebrity
47 Really and Truly Adorable Celebrity PDA Moments
Dakota Johnson Rocks Gucci Suit in Milan
Advertisement - Continue Reading Below
The Cast & Director of 'Cruel Intentions' Reunite
Prince Harry Spotted on a Grocery Run in Canada
Kanye West Leaves Kim Kardashian in an Elevator
Channing Tatum Is "Happy" for Jenna Dewan
Inside Chrissy Teigen and John Legend’s Home
A Look at Royal Family Portraits Through the Years
Are The Weeknd's 'After Hours' Lyrics About Bella?
Kendall and Harry Had a Moment At the Brit Awards