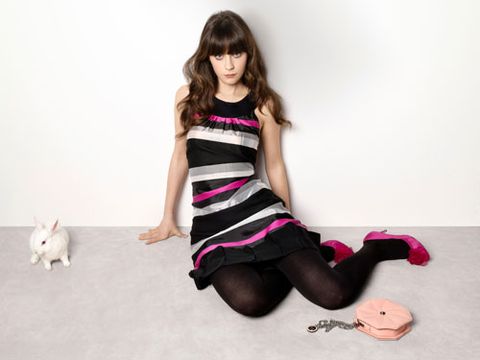 The hippest hip chick flexes her retro charm this month in the offbeat love story (500) Days of Summer, in which she plays, yes, Summer, an aloof secretary with no faith in love, pursued by Tom (Joseph Gordon-Levitt), a coworker who believes in a Hollywood ending.

HER SHTICK: The pixieish saucer-eyed starlet with the deadpan delivery steals every scene, whether starring in indie sleepers or big-budget spectacles.

AS SEEN IN: All the Real Girls, Elf, Yes Man

BEEN THERE, DONE THAT: "Summer's in a different place in her life than Tom is. He's not making the same impression on her that she is on him. It's a rite of passage — everybody's been a Tom or a Summer at some point."

REAL SIMPLE: "In a lot of movies, you'll see people on crazy dates, and you're like, 'No one would ever do that!' So in this film, it's refreshing to see them spend time in a way that seems natural, like taking trips to Ikea."

ROCK OF LOVE: Recently engaged to Death Cab for Cutie's Ben Gibbard, Deschanel admits that she's a romantic in real life. "It's nice that there are movies and songs about romance — it's what motivates us as human beings. I'm all for being brainwashed by rom-coms."

CALL-WAITING: Deschanel fronts She & Him, a Wall of Sound–inspired pop band that released its debut album, Volume One, last year. "One of the things I love about music is that I can put my stamp on it. In movies, I'm not in charge. Being an actress can be a little like being a girl in the '50s: You're stuck waiting by the phone, hoping that the boy you like will call."

WHAT NOT TO WEAR:

"I'm 29 and just decided I'm done wearing polyester. There are so many cute vintage dresses made out of synthetics from the '60s and '70s — but they're so itchy and hot. It's not worth it!"