One more reason to miss and cherish Heath Ledger: According to Jake Gyllenhaal, the late actor refused to participate in jokes about Brokeback Mountain, which were as homophobic as they were plentiful back in 2005/2006. "I remember they wanted to do an opening for the Academy Awards that year that was sort of joking about it," Gyllenhaal reflected in a cover interview for the latest issue of Another Man. "And Heath refused. I was sort of at the time, 'Oh, okay... whatever.' I’m always like: it’s all in good fun. And Heath said, "It’s not a joke to me—I don’t want to make any jokes about it."

On the movie's 10th anniversary in 2015, Gyllenhaal spoke to NPR about the tragedy of Ledger's death in 2008. "I miss working with him and what an unfortunate thing it is that we won't be able to see the beauty of his expression," he said. "I know, not only can this career end in a very short period of time and this or that can happen, but also that life is precious."

"I think losing Heath and being a part of a family that was something like the movie, that movie we all made together, makes you see that, makes you appreciate that and hopefully moves you away from the things that really don't matter to the things that do," Gyllenhaal continued. "I miss him as a human being." 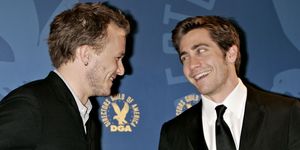 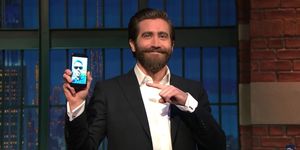