Mary-Kate Olsen has requested an emergency court order to divorce her husband of four years, Olivier Sarkozy, TMZ reports. Olsen first signed a divorce petition on April 17, according to the site. However, due to the coronavirus pandemic, New York courts are only accepting divorce filings in cases of emergency—hence Olsen's emergency order.

According to TMZ, Sarkozy's attorneys emailed Olsen's attorneys, demanding she remove her belongings from their shared New York apartment by May 18. Olsen reportedly said that she's unable to meet that deadline due to New York's stay-at-home mandate and requested to extend the deadline to May 30, but received no response. She further alleged that Sarkozy is attempting to "force her out" by terminating their lease without her knowledge.

Olsen, according to documents acquired by TMZ, asked for the emergency court order to protect her possessions, as filing a divorce petition would result in an "automatic court order" blocking him from disposing of her belongings.

In the divorce petition, Olsen—who married Sarkozy in a private ceremony in November 2015—also requested the enforcement of their prenuptial agreement. TMZ hasn't reported on exactly what that prenup entailed. 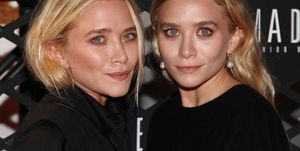