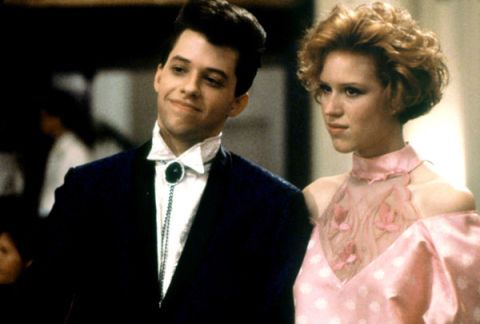 Some movies are made on the premise that their audiences will be too distracted by makeover sequences and dance numbers to expend more than 20 percent brainpower on following the plot. Which is all fine and dandy when you're slumped down mainlining popcorn, but when you've got a spare moment in the shower to really ponder the motivations of "a hideously warped Chimera who kidnaps and holds hostage a young peasant girl," as Meg Cabot described Beauty and the Beast, everything goes kaput.

Below, we offer our critiques of eight cinematic pistachios, so called because they crack under pressure. Share yours with us on Twitter or in the comments, and don't say we didn't warn you that, after this, no film will ever hold the same appeal again.

What is this teaching our youth? That boys will like you if you wear leather and pretend to be someone you're not? Stay good, Sandy, stay good.

Much Ado About Nothing

Hero: Claudio's cute and all, but any guy who dumps you at the altar doesn't deserve your whole back-from-the-dead routine. Plus sleeping with a rando before your wedding happens on far too many hen nights to be considered grounds for public humiliation and/or your dad wishing you would just croak already.

Michael's kind of a jerk, and Cameron Diaz is dropping out of college to marry him. And this "if we're 28, if we've never married, we'll marry each other" business—ugh.

Gone With The Wind

The takeaway must be something like, "Just give up when it gets tough then regret it later," because Rhett and Scarlett take four hours and an entire Civil War to not end up together. How is that even fair?

Courtesy of the Everett Collection

Vivian is a smart, vivacious prostitute who meets her Prince Charming on a Hollywood street corner, and they fall in love during her paid week-long stint in his luxury hotel. The storyline already feels like a reach. And, if all goes according to plan, we're meant to forget this man searches for sex workers and makes millions ruining family-owned companies just in time to swoon over his love for a woman whom society has deemed unsuitable.

He's Just Not That Into You

The entire film tricks you into thinking it's promoting a raw, no bullsh*t approach to dating. If he doesn't make the appropriate effort, he's not interested—and so on. However, when each woman in the ensemble cast is faced with a particular type of man (one that doesn't believe in marriage, one that doesn't want to commit, and one that is constantly pining after the wrong women) they end up changing them. Each one is the exception to the rule, the very notion that the movie makes us believe is impossible.

Everybody forgets Blane 1) was très late for a first date; 2) buckled like a Gucci belt under peer pressure; and 3) essentially picked James Spader over Andie. #TeamDuckieforever

The premise of this movie, albeit what one hopes the fate will be for men who commit domestic violence crimes, is that two witches (Sandra Bullock and Nicole Kidman) knock off Kidman's abusive boyfriend and bury him in the backyard. Naturally, a detective comes out to investigate, falls in love with Bullock, some weird sh*t happens, and they ride off on her broom stick (metaphorically, of course). All we have to say is: If you kill a guy, no matter how horrible that bastard was, you are definitely going to go to jail.


Movies for Women Who Like to Kick Ass in the Office


4 Things the Movies Taught Me About Love


Blame It on the Autobots: Action Movies Make You Gain Weight

Images via the Everett Collection