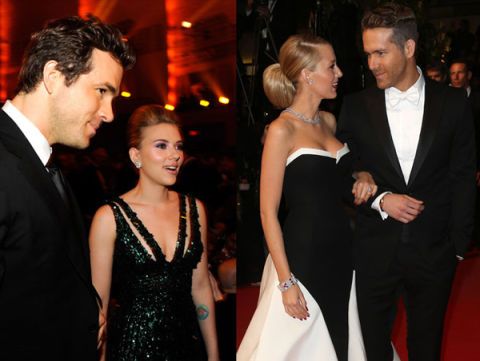 Whether you daydream about a vintage leather jacket-sporting musician, a military man all trussed up in uniform, an Ivy League educated prepster clad in cable knit Ralph Lauren and khakis, or simply have a penchant for tanned, toned forearms, and icy blues eyes, when it comes to love (and lust) everyonehas a type, or at the least, a preference. And celebrities? Well, you know, they're just like us! Below, 17 Hollywood stars who all seem to stick to a very specific "type."

With such classic hunky looks, Ryan Reynolds (chiseled jaw, melt-worthy smile, etc.) obviously attracts some lovely Hollywood ladies. So it's no surprise that his marital history includes Scarlett Johansson and Blake Lively, (his current wife—and soon to be mother of his child) cementing the fact that Reynolds's type isn't just gorgeous actresses, but specifically, towheaded blondes equipped with figures to rival Marilyn Monroe's.

Maroon 5's Adam Levine apparently knows how to use his frontman status to his advantage. His dating life is seemingly governed by a Victoria's Secret model-only policy, with former flames including Nina Agdal, Anne Vyalitsyna, and Angela Bellotte. Of course, when he settled down and tied the knot, it was with Behati Prinsloo, who has strutted the runway at the Victoria's Secret Fashion Show for years. If ain't broke...

There's no denying the complete package that is Amal Clooney, the woman who finally got eternal bachelor George to say 'I do.' However, before she started snuggling up with him, Amal (Alamuddin before she took Clooney) was a relative unknown—outside of the field of human rights law, of course. This isn't the first time George has paired off with a non-celeb. Past girlfriends Stacy Keibler, Elisabetta Canalis, and Celine Balitran, to name a few, all lived life out of the public eye before they started seeing Clooney.

Excluding her ex-husband Marc Anthony, Jennifer Lopez tends to gravitate towards those who perform with her when looking for a partner (and to be fair, she's shared the stage with Anthony before, just not in the dance capacity). J.Lo has found love with her backup dancers multiple times, first with her short-lived marriage to Cris Judd, and second, with her recent boyfriend, Casper Smart.

Sure, she's dated fellow actors IRL, but it's the rockers that inspire Kate Hudson to get serious. Both of her marriages have been to musicians: Her first husband was The Black Crowes' Chris Robinson, and she's now engaged to Muse frontman Matthew Bellamy.

For the majority of her career, Jennifer Lawrence has been linked to Nicholas Hoult, a lanky Brit with ice blue eyes, and her X-Men costar. After their split, she rebounded with Coldplay frontman (and Gwyneth Paltrow's ex) Chris Martin, also a blue-eyed Brit. JLaw, we're starting to see a pattern here.

After her reality TV-documented marriage ended in divorce, Jessica Simpson started looking outside of the pop star realm to find a mate. Her most notable relationships that followed the Lachey/Simpson split were with professional football guys Tony Romo (of the Dallas Cowboys) and presently, Eric Johnson (formerly of the New Orleans Saints), to whom she is married and has two children with.

Emma Stone and boyfriend Andrew Garfield continue to be one of Hollywood's most rooted for couples. But Stone seems to have a penchant for the boyish, could-be-computer-programmer brunette (or does it just seem like that because of Garfield's turn in The Social Network?). The former men in her life, singer Teddy Geiger and Kieran Culkin (brother to Macaulay), fit the same description.

If it wasn't for the famous coupling that came out of Mr. and Mrs. Smith, the film might have merely become one of those titles that vaguely registers with you when you scroll through On Demand. Instead, it will forever be known as the movie that launched the love story that is Brangelina. The 2004 flick isn't the first time Angie found love on set. She met her second husband, Billy Bob Thornton, while filming 1999's Pushing Tin, and her first, Jonny Lee Miller, while co-starring in Hackers in 1996.

Madonna has proved over and over that age is just a number. And this doesn't just influence her on-stage antics, but her choice in men as well. While she's had a slew of male companions over the years, a category she continually returns to is the younger man. She has multiple exes with an over 20-year age gap.

A-Rod has cozied up to gorgeous golden-haired girls such as Cameron Diaz, Kate Hudson, and Madonna, proving that to be on the baseball player's radar, a lady must be famous enough to merit an Academy Award's invitation—not to mention some serious paparazzi attention—and, of course, sport blonde locks.

Leonardo DiCaprio, with his floppy golden mop and killer blue eyes, cemented his status as a Hollywood charmer way back in '90s. So, unsurprisingly, Leo's into dating some other people who are really, really, really ridiculously good looking. He's been linked to a string of models, including Bar Refaeli, Gisele Bündchen, and Alyce Crawford.

Let's face it: T. Swift has made a career out of dishing on her love life—and we love her for it! But through the relationship ups and downs (and their accompanying songs, of course,) we've noticed a pattern developing. All of her past flames sport similarly hued brunette manes that have a tousled, swoopy look to them. Whether the ex is a pop sensation like Harry Styles (or once, Joe Jonas), actors like Jake Gyllenhaal or a member of American royalty such as Conor Kennedy, those begging-to-run-your-fingers-through-it 'dos are omnipresent.

Moss may have a decades-long reputation as a sought-after supermodel, but that doesn't mean she goes for guys who look like they stepped right off the runway. In fact, the men in her past tend to look more like they've just spent a sleepless night working on their next great novel, or composing a symphony. Lucky for men such as Pete Doherty, Jamie Hince, and Johnny Depp, Moss has long perfected the slightly-disheveled-but-could-still-stop-traffic look, so it's certain that she's taught these nearly identical flames a thing or two.

Jennifer Lopez and Jennifer Garner may not have much in common, but they do share a significant figure in both of their romantic pasts (or presents, in Garner's case.) Gone Girl actor Affleck went from a very high-profile, but ultimately failed engagement to Lopez in 2004, before settling down with Garner, with whom he now has three children. The pair continues to be one of the most adorable couples in Hollywood history (watch Ben's ice bucket challenge for further proof.)

Type: Guys Everyone Suspects Are Jerks

We don't want to call her a masochist, but Katy Perry's certainly got questionable choice in men. Perry's two most notable relationships have both been with males that are rumored to be, frankly, jerks. While what goes on in the inner workings of her romances is a mystery, rumors have swirled about both her ex-husband Russell Brand, and more current flame, John Mayer, painting a not-so-nice picture of their personalities.

Cruel Intentions might have been Ryan Phillippe's biggest hit to date, but his romantic life has included numerous big names—Phillippe has dated a handful of ladies most men would be proud to take home to mom. The proof? His early-on marriage to the classic, sweet Southern girl, Reese Witherspoon, and later, relationships with Abbie Cornish and Amanda Seyfried.

Diana Pearl Producer Diana is a producer at ELLE.com.
This content is created and maintained by a third party, and imported onto this page to help users provide their email addresses. You may be able to find more information about this and similar content at piano.io
Advertisement - Continue Reading Below
More From Celebrity
Britney Spears Dedicated a Message to Her Sons
Meghan's Face "Lights Up" When Harry Walks In
Advertisement - Continue Reading Below
Kate Middleton, Millennial, Wore Skinny Jeans
'Sex and the City' Star Willie Garson Dies Age 57
Princess Eugenie's Son Got to Meet Prince Philip
Ashley Graham Is Having Twin Boys
Gabrielle Union Danced Topless at a Window
Ben Affleck Is "in Awe" of Jennifer Lopez
Princess Beatrice Has Given Birth to a Baby Girl
Gigi Hadid's Mom Shared Sweet Pics of Khai