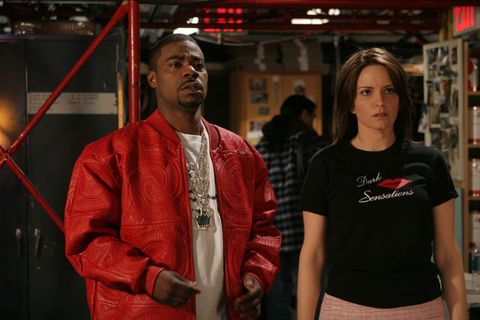 Some girls can dance. Others, like me, can't. My style? Drag me to a club and my moves are in between my 90-year-old grandmother (she has a cane, btw) or some sleazy discotheque where the women only move their arms (my hips do lie, always).

We featured eight actresses who although, may have some interesting dance routines, are still smart, sexy, and independent. And they definitely make me feel better about my lying hips, too. Shake it, girl, shake it.

1. Julia Louis-Dreyfus as Elaine in Seinfeld.

Do you know how to twerk with your limbs? Do you like to use your appendages to make statements on the dance floor? Do you resemble those weird flailing balloon men outside of used car dealerships? Well then, Elaine's "full body dry heave" as George Costanza would say, is the dance FOR YOU. All hail to the mother of heinous public dance moves.

Tina Fey as Liz Lemon dancing reminds me of a suburban mom who had too many wine coolers at the annual block party: she gets boisterous, a little robotic, and she may unbutton her cardigan in the heat of the moment.

Cameron Diaz is one of those people who is so hot that sometimes it is easy to overlook how her dancing is hella weird. In Charlie's Angels, there is a lot of hip gyration, waving of the hands in the air, and the occasional lip bite. It's kind of awkwardly sexy, but at the end of the day, it looks more like Mr. Miyagi's wax on, wax off moves if his hands were butt cheeks.

4. Amy Poehler as Leslie Knope in Parks and Recreation

Is she doing the wormy-basket-weave move with her hands? I haven't seen someone do that since seventh grade — and they received a wedgie after.

This is the epitome of the best coordinated bad two-step ever. Wiig gets the dorky spaghetti arms and the mechanical waist movements down perfectly. She kind of reminds me of a lego that moves.

7. Emma Stone as Herself on Ellen

Here is the move I pull to get all the guys with at the club. This milkshake brings all the boys to the yard, too.

8. Taylor Swift as an Awkward Dancer in Everything

Do you remember that Taylor Swift acts? I didn't, although I was reminded that she was in Valentine's Day with Taylor Lautner (Trivia: before that she appeared on two episodes of CSI: Crime Scene Investigation). Either way, it is a great excuse to include her in this list as she's kind of our wildcard bad dancer. Here is a .gif that my co-worker sent me of Taylor Swift getting low and jiggy with it. Swifty actually has such great loose-limb rhythm that we're surprised that her hat doesn't fall off.


The History of Tattoos