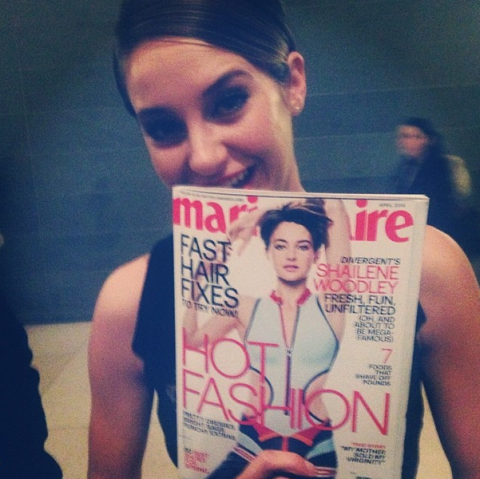 It's all happening! #Divergent

The stars of the much anticipated blockbuster, Divergent, chatted us up (and posed with our April issue!) before the New York premiere of the film. Some of their answers will surprise you...

On what the cast did off-set: "There was definitely a lot of partying happening and I think even the cops were called sometimes."

On her outfit: "Heels, I mean they look cool, but how unrealistic!"

On what makes her happy: "Everything makes me happy, man! We're alive right now so doing this, or sitting in a bath, or hanging with my best friends. Having a glass of wine always makes me really happy. I also really love cashews."

On comparisons to Jennifer Lawrence: "It's totally flattering, Jen is a strong, empowered female."

On working with Shailene Woodley: "It's enriching to watch her as an actor, Shailene is so good. I want to work with her as much as I can. This is the type of movie where a performance could get overshadowed by the spectacle of it all, but there's some really emotional points in the movie. It's like she'll have ten seconds to blow you away and she'll just turn it on."

On his favorite places to hang out in NYC: "I love Brooklyn Boulders. I like to eat at Fish, it's in the West Village, but don't tell anyone! I don't want the line to get longer.

On what faction he'd belong to IRL: "I think that's the problem with the system. Everyone is divergent, we're not meant to choose. That's sort of the message of the movie. But, if I had to, I'd probably choose Amity because they're kind and peaceful."

On a surprising hobby: "I paint miniature figurines. I'm totally into it. Little 20mm tiny figurines, and I'm not going to stop if I get really famous."

On staying grounded: "As fun as it is, it's not like we're solving world peace."

On his love scene with Shailene Woodley: "The very last scene of the whole movie was a love scene. My brothers got into town and they literally walked from the plane on to the set to see me getting funky with Shai."

On his hidden talent: "I can play the harmonica. I know the song, Do You Know the Way to San Jose."

On what every person should try at least once: "Skydiving. I went in New Zealand and it was absolutely amazing."


Quiz: Which Divergent Faction Do You Belong In?