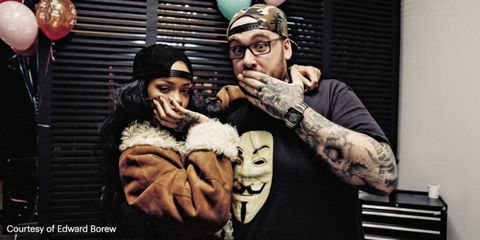 The man behind Rihanna's Goddess Isis tattoo on her chest is the same guy who did the lion on Cara Delevingne's finger and the eyeball on Justin Beiber's inner elbow (you *know* the one that we're talking about). His name is Keith "Bang Bang" McCurdy, and he recently penned a book, Bang Bang: My Life in Ink, about his crazy life as a celebrity tattoo artist. And yes, it includes that time when Justin flew him out to the jungles of Panama, and then requested to be tattooed on a private jet on the way home while the plane was so full of weed smoke that the pilots had to wear oxygen masks.

Most recently, Bang Bang got his needle on the youngest of the Kardashian clan. And while he can't tell us too much about Kylie's new tat, he will say that it's red. He also adds, "I've already asked her and she wants to be the one to explain it. I'll say that it's a tattoo that could be misinterpreted if it didn't come with explanation." Hmmm...

Below, in excerpts from the book, Bang Bang dishes on tattooing and being tattooed by, some of our favorite celebs.

"These days Rihanna can take the needle like a champ, but back then she was horrible. I was already nervous with a reporter standing there, but Rihanna was moving, talking, she's getting ticklish...Her tattoo came out perfect, so it wasn't impossible, but she sure didn't make it easy."

Tattoos by Bang Bang: Feather on her hand and more.

"Tattooing Rita Ora is always a blast. The first time I tattooed her, it was a little too much fun, and she had repeated wardrobe malfunctions. In memory of her breasts, Rita gave me a dove tattoo with tits. Ha!"

Tattoos by Bang Bang: Lion on her finger, diamond earrings, double Ds on her hip, "bacon" and "Made in England" on her feet, and many more.

"The thing about Cara is that yes, she's a supermodel, but she's also such a goofball. I mean, I tattooed the word 'bacon' across the bottom of one foot and 'Made in England' across the other. The girl does not take herself too seriously at all. She's so much fun, you can't help but love her."

Tattoos by Bang Bang: Words "Jamais seule" on her foot.

"The two of them [Ashley and Vanessa Hudgens] were clowning around, laughing the entire time, because for some reason Ashley was wearing a short dress with no underwear. So she spent most of the time trying to cover her ass while I tattooed her foot. It was pretty funny."

Tattoos by Bang Bang: Roman numerals on the back of her neck, phrase on her hip, Arabic writing on her back, and another yet to be revealed.

"Mostly we did her work at whichever shop I was working at, but the night she got the tattoo across her right hip that reads, 'God who strengthens me,' she actually came to my house. That was the night Bieber called me to say 'Keep your eyes off my girl, bro.' Haha"

Tattoos by Bang Bang: Phrase on the back of her shoulder, stacked Roman numerals on her side.

"Before Demi came in for her first tattoo, we got word that she wasn't cool with having drugs or alcohol around her, so we were expected to extinguish our weed and dump any beer."

Tattoos by Bang Bang: Crescent on the inside of her elbow, lettering "Love Yer Brain" on her arm.

"When I met Miley, she was in the pool on the roof of her friend's downtown building. So there I am, holding my tattoo equipment, and there's Miley, basically covered only by a few strategically placed strings."

Tattoos by Bang Bang: Peppermint on her foot, prism on her heel, strawberry on her foot, Roman numerals on her middle finger.

"Unlike most of the amateurs who've tattooed me, Katy wasn't nervous. I was kind of surprised until I found out that I wasn't the first person she tattooed. She told me she once tattooed a friend in high school with a pin and some ink!"

Tattoos by Bang Bang: Cross on his chest, "Believe" on his arm, "Forgive" on his hip, an eye on the inside of his elbow, a rose on his arm.

"Most of my regular clients either text me or call the shop, because I hardly ever pick up my phone anyway. But Bieber somehow always manages to get me, and I'm inevitably caught off guard. Every time he calls, it's the same thing: 'Yo, it's JB.' Then I go, 'Who?' And he yells, 'BIEBER!' Then he's like, 'Yo, I'm trying to get tatted.' Every time."

"Which isn't to say Bieber's always easy. I've waited on that kid for hours. This little motherfucker called me one night at 3 a.m. for weed."

Alanna Greco Weekend Editor I'm a writer and editor based in New York City.
This content is created and maintained by a third party, and imported onto this page to help users provide their email addresses. You may be able to find more information about this and similar content at piano.io
Advertisement - Continue Reading Below
More From Celebrity
The Queen Was by Prince Philip's Side When He Died
Prince Harry Is "Really Upset" Over Philip's Death
Advertisement - Continue Reading Below
Will Harry & Meg Attend Prince Philip's Funeral?
The Queen Is Hopeful Prince Harry Will Return Home
Prince Charles Visits the Queen at Windsor Castle
Harry & Meghan React to Prince Philip's Death
Prince Philip Will Not Have a State Funeral
What 'The Crown' Got Wrong about Prince Philip
Touching Things Queen Has Said About Prince Philip
Your Guide to the Current Royal Line of Succession