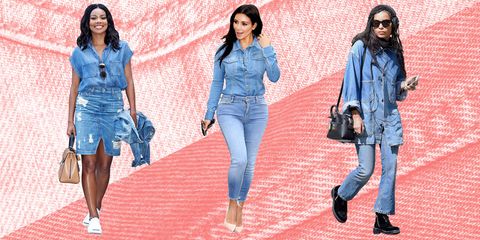 When confronted with the words "denim-on-denim," terrifying visions of Britney Spears and Justin Timberlake probably flash before you're eyes. But if the last couple years have taught us anything, it's that one can wear denim-on-denim without inexplicable rhinestones and random alternate-denim patches. And hey—if you're still on that patchwork grind, no worries, there's hope in the form of Kendall Jenner.

We know, we know: it's not the best. But if you think about it hard enough, it's also not the worst.

In case you're thinking "wait, this outfit needs even more denim," please note that Rihanna tied a denim blouse around her waist.

We want to talk about denim, but all we see is this massive fanny back, so...moving on.

When experiencing denim-related doubt, simply iron on a bunch of patches. As the saying goes, more patches, less problems.

Contrasting colors help break up the outfit, but more importantly, socks with pumps appear to be happening here.

Strappy heels make this ultra-laid back denim outfit fancy AF, while the white tee is a welcome break from monochrome.

Denim-on-denim is just, like, a lot of denim—but note how expertly Alessandra breaks up the look with three different incarnations of brown leather.

Chic black booties like Chrissy's allow denim fans to wear denim-on-denim without being all, "GUYS, DENIM!"

Or pull a Jessica Alba and pair your jumpsuit with a fedora. Either way.

While it's unclear if Kylie's holding a Fendi purse or a small baby Ewok, what is clear is that she's the embodiment of denim goals.

More proof that mixing washes is a must.

Wait, we take it back, Kendall just proved that monochrome washes are totally superior. Everything is a lie.

Gigi's making a case for form-fitting denim blouses, and she's making it well.

In which Kim turns the Texas Tuxedo into the Parisian Tuxedo.

See? Told you Kendall could pull off denim patches.

That feeling when you're not sure about your all-denim outfit, but then you're just like "f*ck it, where's my newsboy cap?"

This looks is straight out of a '90s Gap ad, and we mean that in the best way possible.

There's a reason this photo was last on our list. (Because best for last, in case that wasn't abundantly clear.) 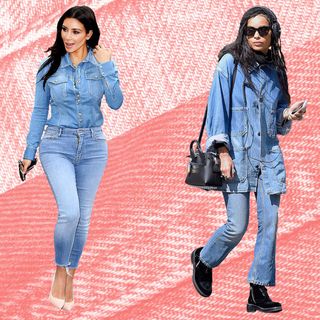 Advertisement - Continue Reading Below
Mehera Bonner Contributor Mehera Bonner is a news writer who focuses on celebrities and royals.
This content is created and maintained by a third party, and imported onto this page to help users provide their email addresses. You may be able to find more information about this and similar content at piano.io
More From Celebrity
The Queen Displayed a Rare Photo of the Sussexes
Justin Backs Britney After Conservatorship Hearing
Advertisement - Continue Reading Below
Jen Aniston Said a Male 'Friends' Star Was Rude
Jennifer Aniston on "Silly" Love Life Speculation
People Are Devastated by Britney's Revelations
Britney Spears on "Abusive" Conservatorship
'Too Hot to Handle' S2 Was Filmed In Paradise
About That "Sexy Nerd" From 'Too Hot to Handle'
Prince Charles Is Leaving London When Harry Visits
What Happens on Katie's Season?