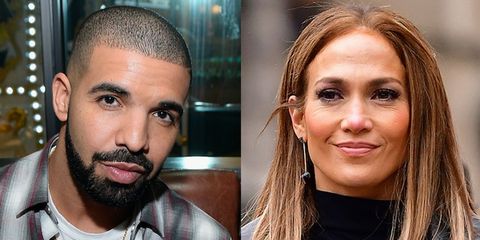 Not only did Drake decide to surprise-drop two brand new songs this weekend, he also revealed the title of his next project or album—Scary Hours. And as if his new music wasn't exciting enough, Drake also graced us with an unexpected, but completely welcome, reference to Jennifer Lopez in one of the tracks.

Of course, Drake's romance with Lopez was short but sweet, with rumors about the couple swirling in December 2016, before their supposed break-up in March 2017. But Drake clearly hasn't forgotten about the relationship, even though Lopez has since moved on with Alex Rodriguez.

In March 2017, Lopez told Trevor Noah on The Daily Show, "Let me clear this up. I am not with Drake. Maybe that's all I need to say." But if Drake's new song is anything to go by, it seems as though the "Hotline Bling" rapper was pretty attached to Lopez. He even seems to suggest that he "lost" Lopez to somebody else... Rodriguez, perhaps?

While we'll have to wait a little bit longer to find out if there are any more J.Lo references on Drake's new album, it seems as though the rapper has been inspired by his real-life relationships, which might mean that Rihanna gets referenced too.