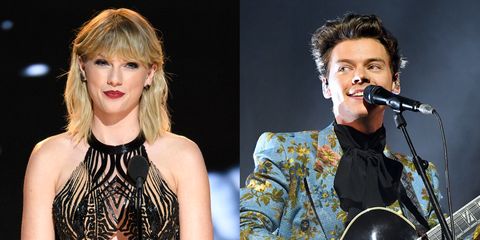 Harry Styles knows that you care way more than you should about his relationship with ex-girlfriend Taylor Swift, and he's ready to play with your feelings a little more.

Onstage at one of his concerts the other night, Styles mentioned Swift in such a sly way, that fans are already praying for a reunion. Wishing an audience member happy birthday, Styles asked how old she was turning, to which the fan replied, "22." It's not hard to guess what happened next.

Announcing the news to the audience, Styles said, "22. She’s 22, okay? I don’t know about..." And as every Swift fan knows, that's exactly how the lyrics to "22" go. You can watch the whole interaction on Twitter:

Unfortunately, Styles didn't launch into a full-on cover of "22," although he should definitely consider doing so in a future set.

Styles and Swift started dating in November 2012, and were photographed together for the first time in December the same year, when they were spotted in Central Park. Perez Hilton reported their breakup on January 7, 2013, with a source revealing, "They are both really busy and never in one place for long. Harry's really upset about the split and is really sensitive about it." They both went on to write songs about each other.

the tea is that harry will never forget taylor as long as he lives as well pic.twitter.com/jyutkmDj95

me: i'm over haylor now they're both in separate relationships and it's been years
harry: taylor
me: HELLO BITCH!

Perhaps the best things that Swift has bestowed upon the world are the copious references to ex-boyfriends that she's scattered throughout her discography. Instead of having to rely on gossip and paparazzi photos, fans of the "Look What You Made Me Do" singer can relive every relationship she's had via intimate song lyrics, and hidden album liner notes. And clearly, Styles loves Swift's work as much as the rest of us.