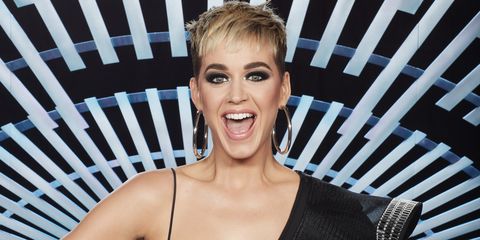 Proving that however famous you might be, your parents are still your parents, Katy Perry's mom and dad descended on her latest episode and proceeded to royally roast their daughter on air.

Perry was raised in a religious household, by her mom, Mary Christine, and her preacher father, Maurice Keith Hudson. As the Daily Mail reports, both parents, who are in their seventies, turned up at the American Idol set, and revealed some truths about the "Roar" singer.

Of course, Perry nervously squirmed the entire time, because we all know that our families have the worst dirt on us.

Bring your parents to work night on #AmericanIdol! @KatyPerry's parents in the house! pic.twitter.com/cvycy9WOeU

First, Perry's mom told the audience, "She's still the bird, she's still mouthy, and they add wisdom to that," referring to fellow judges, Lionel Richie and Luke Bryan. And possibly suggesting that the men on the panel offer more wisdom than her superstar daughter, which is pretty brutal?!

As for whether she's always been as "mouthy" as she is now, her dad confirmed, "Um, yeah." And then her mom decided to chip in by saying, "She's the middle child, they always want the most attention." Don't hold back, you guys!

Trying to hold her own, Perry shouted, "I feel like it's turned out okay for them!" But it's safe to say that her parents won this round, by roasting the singer on television in front of millions of viewers. It's truly the stuff of nightmares.