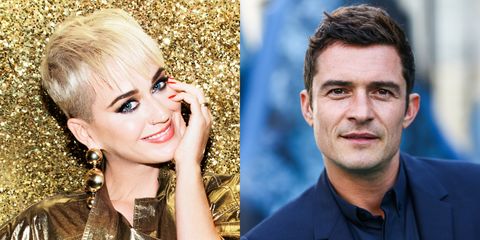 Katy Perry and Orlando Bloom's on-again-off-again relationship definitely seems to be back on if her latest Instagram comments are any indication.

In response to Bloom posting an astounding photo of his gorgeous abs, Perry decided to publicly comment, saying, "Oh hey! I was actually looking for a washboard to do me laundry on." Clearly, this is not the first time that she's seeing these particular abs, either.

Bloom explains in the photo's caption that the shot is a throwback, and that he's using it as inspiration to get back into shape for his next play, Killer Joe:

The actor called the snap "a lil reminder that I got to that place and I know how to get to that place when I need to go to that place 👊🏻 diet-lifting-hours of #nopainnogain and a #mindfulness presence and #focus that just won’t settle." He also has the utmost "respect for those who can maintain it I try to stay close which is good because im heading back in that direction."

Recent reports suggest that Bloom and Perry are officially giving their relationship another go. According to the The Sun, via a source in Feb. 2018:

"They’re back on. Katy wants to make things work this time around. She tried, but she couldn’t cut him off. She cares too much about him. This time, they’re keeping things low key–but they’re back together."

Before that, they were spotted vacationing in the Maldives together in Jan. 2018, at luxury resort Amilla Fushi.

And now, Perry is complimenting Bloom's abs in front of the entire world.