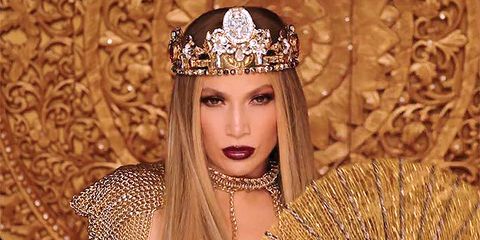 Today, Jennifer Lopez released the video for her newest single, "El Anillo," which translates to the "The Ring." The video is gorgeous on a grand scale and regal in every way and basically tricks you into thinking you're watching a new episode of Game of Thrones.

And J.Lo giving off fierce Cersei Lannister vibes in a luxurious throne room:

And walking the halls like she owns the place (which, as queen, she absolutely does):

Even the shots of the falling rings look like they could be pulled from a Game of Thrones promo:

The video, which features Lopez's character meeting with people who appear to be queens of other fantasy nations, also contains a shot that looks like a nod to Black Panther:

Watch the full video below:

Which translates to: "I have never felt anything this grand/Your wild side drives me crazy/you have given me so much that I have been thinking that I have it all, but/when will I get the ring?"

The lyrics have led to much speculation that Lopez is sending a not-so-subtle hint to her boyfriend of more than year, Alex Rodriguez. That's not the case, apparently.

"Listen I didn't write this song," Lopez told ET Online. "Somebody wrote it for me specifically, which I thought was really funny. Not because I'm thinking of doing anything like this, but because it's a funny thing and I played it for Alex and I was like, 'Are you cool with this? I think it's kind of funny.' He's like, 'Yeah, I'm totally cool with it.' So at the end of the day, it's a great song with a Brazilian funk beat to it and I just loved it. I could just see myself dancing in the video."