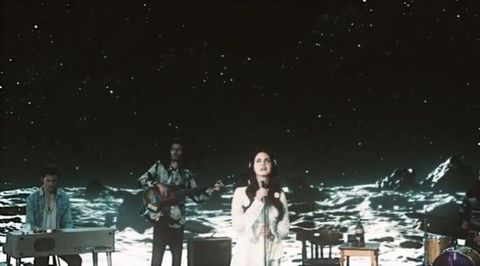 Over the weekend, Lana Del Rey dropped her first new single in almost two years, "Love." Lana teased the album with dreamy, cinematic posters around Los Angeles before its release.

The video is just as dreamy and cinematic as the posters and as the song itself, featuring Lana in a long-sleeved, white dress with flowers in her hair singing about the beauty of being young and in love.

The shots of Lana are cut between vintage-looking, sometimes trippy (this is a Lana Del Rey video, after all) scenes of couples in love. Oh and in space. Because of course the video would be literally out of this world.

"Love" is the first single from Lana's forthcoming album, which is due out later this year.

"I made my first 4 albums for me, but this one is for my fans and about where I hope we are all headed," she said in a press release about the album.