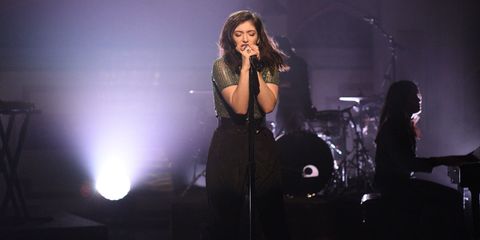 Last night, Lorde, in true Lorde fashion, treated her fans to a magical surprise. Ahead of her performance at Coachella on Sunday, the singer played a secret show at Pappy & Harriet's in Pioneertown, making the announcement on Twitter mere hours before it took place. Tickets were only $20 and sold out in minutes, because Lorde. But fans who were lucky enough to snag tickets got to hear tracks from her forthcoming album, Melodrama, before anyone else. As for the rest of us, we got to see snippets thanks to social media:

It's hard to believe that Lorde's last live performance, aside from her stint on SNL, was way back in December 2014. Judging by footage from the event, Lorde was more than happy to be back on stage performing for fans, and the packed crowd weren't complaining either.

Most notably, Lorde previewed the long-awaited track "Sober," prepping everyone for her performance on Sunday. If you weren't already excited about seeing the singer take the festival stage this weekend, well, take a listen: