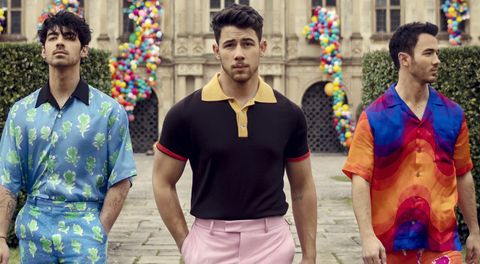 The Jonas Brothers are back and, yeah, they're still burnin' up so hot we had to check out calendars to make sure it wasn't actually still 2008. At the end of last month, Kevin, Joe, and Nick staged a surprise group comeback, dropping a new single, "Sucker," along with a video starring not only them, but their respective life partners as well–Danielle Jonas, Sophie Turner, and Priyanka Chopra.

The comeback wasn't an easy process though. In the six years since they went on hiatus in 2013, the JoBros have been through a lot and it took some work (and professional help) to get on the same page for working together again.

During an interview on The Late Late Show with James Corden, Nick revealed that he and his brothers underwent "a year basically" doing therapy together to work through issues before going back into the studio together:

"We literally spent a year basically doing therapy, working through some things, and figuring out what this chapter would look like. We’ve had to be really open and honest. There are things in the past that bothered us from time to time, even in our performances that we would do."

Watch the interview yourself below: