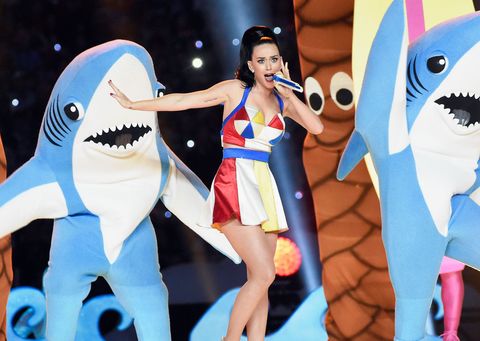 Like Britney Spears before her, and Kim Kardashian before her, Katy Perry is debuting a gaming app where fans can get to know her cartoon doppelgänger. The game, titled Katy Perry Pop, introduces users to a "fun colorful world" that will help guide their musical dreams. So, if your musical dreams include aspiring to Katy Perry-levels of virtual fame, you're in luck.

The app is produced by Glu Mobile, the same company behind Kim Kardashian: Hollywood, and will include Katy Perry's voice. Glu announced news of their collaboration with Katy back in February, and apparently had a surge in stock prices shortly after.

Considering that Kim's game reportedly made $74.3 million in 2014 revenues, Left Shark (er, Katy) can probably expect her eyeballs to turn into dollar signs sometime in the next few weeks.

Mehera Bonner Contributor Mehera Bonner is a news writer who focuses on celebrities and royals—follow her on Instagram.
This content is created and maintained by a third party, and imported onto this page to help users provide their email addresses. You may be able to find more information about this and similar content at piano.io
Advertisement - Continue Reading Below
More From Music
Reese & Ryan's Son, Deacon, Drops His First Single
Life Advice From an Icon, Cher
Advertisement - Continue Reading Below
J.Lo Is Basically Naked on Her New Single Cover
Karaoke Songs Anyone (Yes, Anyone) Can Rock
Um, This Dude Claims Lady Gaga Stole “Shallow”
Sad Taylor Swift Is the Best Taylor Swift
Jennifer Lopez's NYC Concert Was Evacuated
Miley Cyrus Channels Britney Spears' Iconic Look
Ginger Spice Apologizes for Leaving Spice Girls
Fans Walked Out of the Spice Girl's Reunions Tour