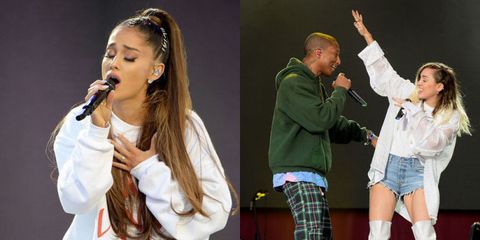 The One Love Manchester benefit concert happened today and it was as beautiful and moving as we could have hoped. Ariana Grande brought together some of the biggest names in music to stand with Manchester after the bombing at her concert May 22 that left 22 dead.

The show was even more incredible than we could have imagined. Just look at the setlist:

Here are some of the highlights from the concert, in case you missed the live stream:

Miley Cyrus and Ariana Grande's "Don't Dream It's Over" duet:

#OneLoveManchester #WeStandTogetherManchester my heart is so happy seeing everyone else so happy @ArianaGrande https://t.co/Il4IOMDWXg

Ariana Grande's emotional "My Everything" performance:

Katy Perry's stripped down performance of "Part of Me":

Ariana Grande's show-stopping performance of "Somewhere Over the Rainbow":

And there wasn't a dry eye in the house 😭🌈😭🌈😭🌈😭 #SomewhereOverTheRainbow #OneLoveManchester @ArianaGrande pic.twitter.com/6IO8Fv6cOT