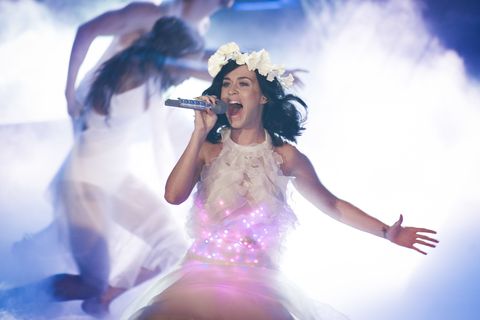 At the same time as it was embroiled in the Ray Rice assault scandal, the NFL was in talks with Katy Perry to headline its Super Bowl halftime show. Three months later, the queen of feel-good teeny pop was officially chosen to perform a 12-minute mash-up of her greatest hits.

"It wasn't an image problem, it was a problem,"she said in a recent interview with the Associated Press. "We were all watching and asking ourselves questions about what this year would mean. But I think that the problem that the NFL is dealing with is a global problem...we need to work out—or educate people on."

"I'm all about female empowerment and uplifting people's spirits, and people finding their own voice with songs like 'Roar' and 'Firework,' so maybe there is no better person" for the show, Perry continued. "Hopefully I can bring that incredible strength and empowerment to people through the performance."

Also on offer are multiple Jeremy Scott costumes, at least two "worlds" (your guess is as good as ours), special guests like Lenny Kravitz, and possibly an unreleased song. Don't expect a scripted wardrobe malfunction to be part of the spectacle, though: "My intention is that everyone talks about the music and nothing else...Sometimes you can't control other people. But I will control myself."

Katy Perry Will Have Her Pizza and Wear It Too

Great Thing of the Day: Katy Perry Belts Out 'All by Myself' in Her Cheeto Costume