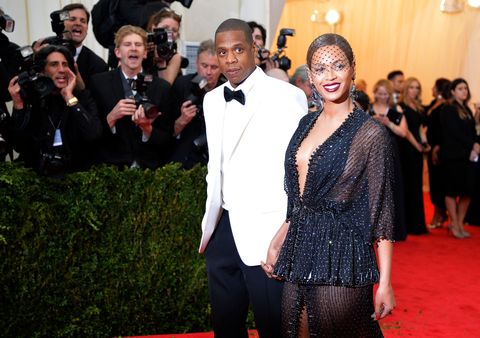 The not-free Spotify-like platform promises higher-quality sound and no ads, as well as first-listen exclusives with big-deal artists like the ones who've already shown support on social media:

Music makes the people come together. Join Madonna and turn your profile picture blue. Do it for the music. #TIDALforALL

As we (obliquely) predicted, Taylor Swift was in on Jay Z's music streaming scheme: Her albums are now available for listening through TIDAL, which charges users a monthly subscription fee of $19.99. Hint: Take the seven-day free trial so you can air-guitar to "Eyes Open" as frequently as you like.

Original post, 1/30: Partly because he is a mogul and partly because he can, Jay Z has splashed out $56 million on a Swedish music-streaming company to add to his ventures in champagne, fragrances, sports agencies, sports bars, apparel, and NBA basketball teams.

Aspiro runs WiMP, an audio service that offers 25 million songs and 75,000 music videos to half a million subscribers in Europe, according to CNET. (For comparison, Spotify has 15 million paying subscribers.)

Is Hova out to vertically integrate the music industry? Will he rename WiMP something more on-brand? Did Taylor Swift use her Grand Master connections to exact indirect vengeance on Spotify for not paying her enough? (Solutions: yes; Big Listenin'; hell yes.)

Jay Z Reportedly Selling His Share in the Barclays Center

Chelsea Peng I'm Chelsea Peng, the assistant editor at MarieClaire.com.
This content is created and maintained by a third party, and imported onto this page to help users provide their email addresses. You may be able to find more information about this and similar content at piano.io
Advertisement - Continue Reading Below
More From Celebrity
Marvelous Women Scarlett Johansson & Florence Pugh
Gigi Shares Glimpse at Baby's Wardrobe
Advertisement - Continue Reading Below
Matthew McConaughey and His Son Are Twinning
Ashley Graham Opened Up About Sex After Childbirth
Brad Pitt and Nicole Poturalski Have Broken Up
Chrissy Teigen Shared a Sweet Video With Luna
EmRata Displayed Her Bump in an Open Button-Down
Harry Sent a Legal Warning Over "False" Article
Chrissy Teigen Talked About Her Baby Loss Photos
Chrissy Teigen Opens Up About Her Loss