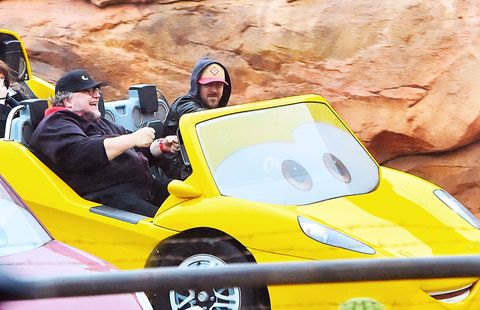 In bizarro news of the day: Ryan Gosling and Guillermo del Toro skipped out on the Oscars to hang out in Disneyland. Yes, Disneyland. Opting out of donning suits and posing in front of photogs, the duo were seen wearing hoodies and caps and enjoying attractions like the Cars ride, in which the Drive star proved his steering prowess, while del Toro laughed in the passenger seat.

The friends spent the day at the theme park, posing for photos with fans. It seems both are not particularly keen on the big Hollywood award show—they both were last seen in attendance for the 2007 event, and haven't been back since.

In other proving-stars-are-normal-people news, Jennifer Lawrence was seen hanging out in the Prudential Center in Boston instead of heading to the Oscars. In case you don't know what the Prudential Center is—it's a mall. Apparently, J.Law (who is filming her new movie Joy nearby) has been seen there frequently, where she often takes Flywheel classes.

Hollywood—when did y'all become so chill? Keep doing  you.

The Oscars in GIFs

Here are all the 2015 Oscar Winners

Samantha Leal Senior Web Editor I'm Sam, the senior editor at MarieClaire.com.
This content is created and maintained by a third party, and imported onto this page to help users provide their email addresses. You may be able to find more information about this and similar content at piano.io
Advertisement - Continue Reading Below
More From Celebrity
Chrissy Teigen's Therapist Inspired Her New Hobby
J.Lo Claps Back After Botox Comments
Advertisement - Continue Reading Below
Katie Just Posed in a Shirt Her Boyfriend Designed
Meghan Wasn't Appreciated for Royal Contributions
Harry & Meghan Have Had a Painful Year Since Exit
The Queen's Hot Grandnephew Is a Thirst Trap
Watch Diana Play Impromptu Piano in Rare Clip
Peek Inside the Cambridges' Country Home
Harry Is Heartbroken About His Family Situation
William and Harry Could Fight Over Diana's Legacy