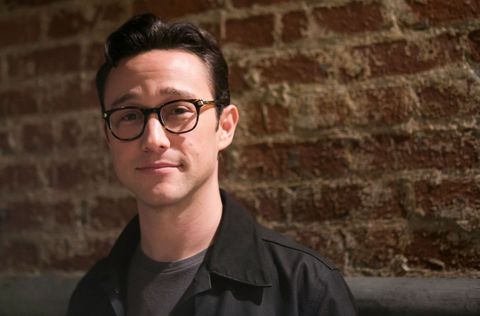 Food for thought: Where has Joseph Gordon-Levitt been hiding? It feels like we haven't seen him since 500 Days of Summer made us feel all the things about romance. But now he's come out of hibernation to remind us he's a hella good actor.

"I was surprised when I first learned this about Snowden—that he enlisted in the US Army in 2004. He wanted to go fight in Iraq, but during basic training at Fort Benning, he broke both of his legs and received an administrative discharge. After that, he was still determined to serve his country (love him or hate him, you gotta admit the guy's strong-willed) and so he ended up getting a job at the CIA, which is where his career in Intelligence began," wrote Gordon-Levitt on his Facebook page.

"Today's scenes felt like a really good way to start this shoot. It was hard, but of course, nowhere near as hard as real basic training. And me, I'm just honored and excited to be doing a soldier sequence with Oliver. I keep saying to myself: 'fuck, this guy directed Platoon!'"

Is it too soon to pre-order tickets? No, right?

Kenny Thapoung Social Media Editor When I'm not stalking future-but-never-going-to-happen husbands on Facebook, you can catch me eating at one of NYC's B-rated or below dining establishments—A-rated restaurants are for basics.
This content is created and maintained by a third party, and imported onto this page to help users provide their email addresses. You may be able to find more information about this and similar content at piano.io
Advertisement - Continue Reading Below
More From Celebrity
See the Royals Socialize at a 1991 Cocktail Party
Eugenie's Pics from Inside Harry and Meghan's Home
Advertisement - Continue Reading Below
Queen Trolled Tourists Who Didn't Recognize Her
Blake and Ryan Recreated Their First Date on IG
Charles Expertly Ignored Boris Johnson's Snafu
How Kitty Spencer's Wedding Dress Honored Diana
Dolly Parton On the #FreeBritney Movement
Will & Kate Are Nervous About George's Future
George Won't Be Forced to Go to Boarding School
Diana Would Have Written a Memoir Too, Friend Says