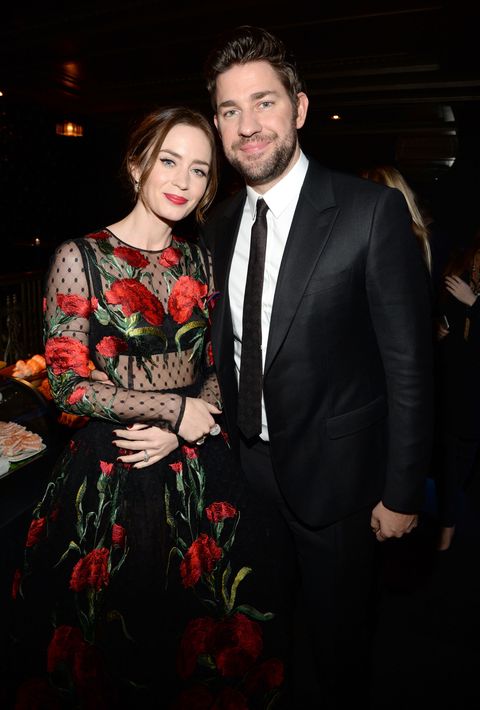 Unpretentious famous-person duo Emily Blunt and John Krasinski are already dangerously cute together, so what would happen if you animated their little faces and stuck them under a magical big top? I don't know—the human brain wasn't made to comprehend that much adorableness.

Because the smart thing to do was to combine acting, spending time near each other, and making money, Blunt and Krasinski—who previously worked on Miyazaki's The Wind Rises together—are lending their voices to Zoe and John in the indie feature Animal Crackers. Variety reports the cartoon film will be about a couple "whose family life is turned upside down when they inherit a rundown circus and a mysterious box of Animal Crackers, which magically changes the person who eats them into animals." Yes. This is not a scam because Sylvester Stallone, Ian "You Shall Not Pass" McKellen, and Danny DeVito are also part of the cast.

Let's all hope it does well, so we can be privy to another mid-acceptance bear hug. Please.


You should also check out:

Chelsea Peng I'm Chelsea Peng, the assistant editor at MarieClaire.com.
This content is created and maintained by a third party, and imported onto this page to help users provide their email addresses. You may be able to find more information about this and similar content at piano.io
Advertisement - Continue Reading Below
More From Celebrity
People Are Devastated by Britney's Revelations
Britney Spears on "Abusive" Conservatorship
Advertisement - Continue Reading Below
'Too Hot to Handle' S2 Was Filmed In Paradise
About That "Sexy Nerd" From 'Too Hot to Handle'
Prince Charles Is Leaving London When Harry Visits
What Happens on Katie's Season?
Meghan Wrote a Book When She was in Eighth Grade
Irina Pairs Her LBD With a White Shirt and Sandals
A-Rod Explained Why He Was Spotted With Ben's Ex
Selena Felt "So Less Than" in Past Relationships