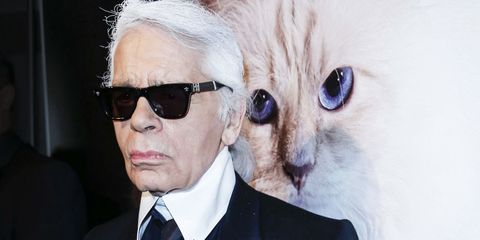 In life, it's important to acknowledge that some people will always be more successful than we are. Beyoncé is one of them. Sheryl Sandberg is another. And somewhere on that list, perhaps most depressingly, is Choupette, Karl Lagerfeld's uber-bourgeoise cat.

Choupette Lagerfeld, as she is officially known to the peasant masses, already has two maids who serve her every feline wish, not to mention an Instagram account with a legion of adoring fans over 58,000 strong.

But this is no stay-at-home kitten; Choupette is a savvy and independent business-cat. As Lagerfeld recently told The Cut, she made 3 million euro (roughly 4 million American dollars) last year alone by modeling for a Vauxhall Corsa car calendar and for cosmetics brand Shu Uemura.

And she has standards to match. Lagerfeld said he won't let her debase herself by starring in something as basic as a cat food commercial because she's "too sophisticated for that."

Of course, like many icy fashion icons, she "hates children and other animals," and needs to be catered to 24/7.

"She is the center of the world. If you saw her, you would understand. She is kind of Greta Garbo. There is something unforgettable about her, the way she moves, the way she plays. She's an inspiration for elegance. For attitude." Fancy, non?

Join me for #ManiMonday, oui?

Chanel Creates a Full-On French Brasserie for Their Fashion Show, Continues to Be the Coolest

Cara Delevingne and Pharrell Sang Together at the Chanel Show

A Peek into the Life of Choupette