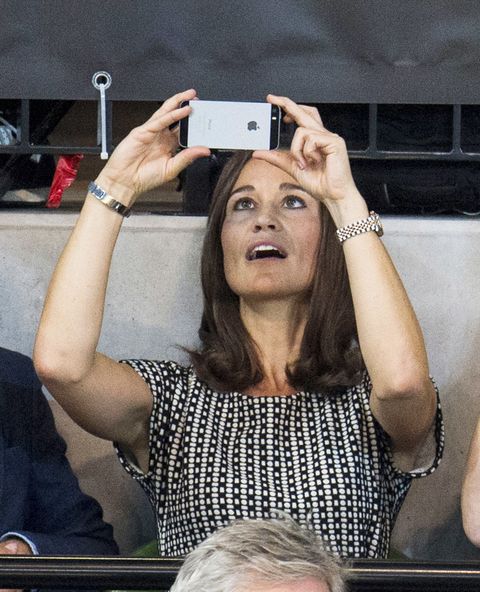 Update, 8/4: While Auntie Pippa was taking the escalator at Heathrow Airport, a fellow traveler standing behind her got a good look at her phone's lock screen. Guess whose photo was on it? Just guess.

"She pulled out her phone and her lock screen had a picture of George and Kate smiling together looking just like a regular family," 16-year-old Grace Stroup told People. "It was so cute!"

Personally, I have the Mario Testino shot as *my* lock screen because of its high naughtiness quotient, but any of these options would do nicely.

Update, 7/29: If it wasn't already apparent from the prominently displayed royal-baby pictures and all the bragging—so much bragging that the Commonwealth was like, "OUR EARS"—Prince Charles thoroughly enjoys being a grandpa.

To further spoil his precious little Georgie, Grandpa Charlie had a $31,248 handmade artisan shepherd's hut constructed in the meticulously trimmed and manicured gardens of his stately home, the Daily Mail reports. It has French oak floors, a wood burner, and a little bed for naps, *and* it comes with a second treehouse—one Princes Harry and William played in when they were small.

The Mail says the whole point of the gift was to bribe George into hanging out with G-pa more, which is both sweet and a little sad. But by golly, I think it'll work.

Update, 7/22: Those guards with the tall hats and the no-smiling policy broke character today, because hello? Who wouldn't for the squishiest royal 2-year-old in the universe?

Some of them play instruments, apparently, so they did that to the tune of "Happy Birthday," and it was fun and...brassy. Watch the clip below.

Thank you to the Grenadier Guards for playing ‘Happy Birthday’ at today’s Guard Change! #HappyBirthdayPrinceGeorgehttps://t.co/Gkcal0kShn

Update, 7/21: To celebrate His Little Monkey-ness's turning 2 years old Wednesday, Prince George's family will let him run around outside.

According to People, William, Kate, and Charlotte will be spending the day at Anmer Hall, where they might play games and have cake but will most definitely laugh a lot because George has apparently begun to talk and what else could he say but hilarious stuff?

We will of course update with photos (if there are any), but until then, here is a pretty good representation of what he will be doing tomorrow.

Update, 7/13: Prince William starts his new job as an air ambulance pilot Monday, which he says is hard—but no harder than it would be for regular people—because it means leaving his young family.

Princess Charlotte is "a little joy from heaven," he told reporters, while Prince George behaves exactly as you imagine he does. "It is more responsibility, looking after two little ones, especially when George is around. He's a little monkey," Prince William said.

Told you. Watch the interview here.

Update, 7/7: While the rest of us are expected to lower our eyes and murmur "Your Majesty," Prince George can get away with calling the Queen something far more familiar because he's so squishy and, duh, related to her.

The Mirror captured video of George et entourage returning to Sandringham house after Princess Charlotte's christening, and it appears he refers to her as "Nanny" or "Granny," depending on your hearing/understanding of the English accent.

So maybe that's what they were *really* discussing in this photo? *squish*

Chelsea Peng I'm Chelsea Peng, the assistant editor at MarieClaire.com.
This content is created and maintained by a third party, and imported onto this page to help users provide their email addresses. You may be able to find more information about this and similar content at piano.io
Advertisement - Continue Reading Below
More From Celebrity
Jennifer Aniston Answered Bizarre Fan Questions
Prince Charles "Really Wants to Meet" Lilibet
Advertisement - Continue Reading Below
Britney Spears Deleted Her Instagram Account
Megan Fox Won't Be Told "What a Woman Should Be"
Jennifer Garner Shared an Emotional Message on IG
Travis Scott Discussed His Parenting Style
Kanye West Unfollowed Kim Kardashian on Instagram
Kate Hudson Is Engaged to Danny Fujikawa
J.Lo & Ben Affleck Kiss in Masks at the Met Gala
Who Is Alexandria Ocasio-Cortez's Partner?