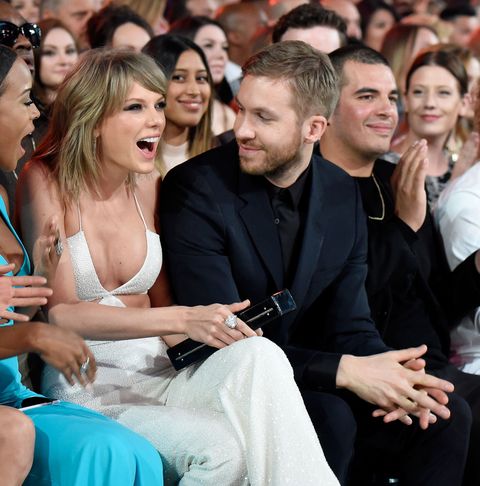 Update, 4/16: Even though Selena Gomez and Taylor Swift hit the red carpet together as each other's dates, things are still very clearly on with Calvin Harri at a Grammys after-party at Hyde LA. Observe.

Update, 12/23: Taylor and Calvin have been keeping their love on the DL in recent months (what the heck, guys?), but now some new photos have hit Tay's instagram and we're all the better for it.

So much holiday cuteness. *Squeal*

Update, 8/26: All the feeeeeeeels. After performing her final number of the night—"Shake It Off"—the singer took a couple of bows before mouthing "I love you" to a certain Scottish DJ. (You know the one.) A fan caught all the action, so now we can *all* relive the cuteness.

Obviously, she could have just been saying it to her lovely crowd. But, let's not ruin the fairytale here.

Update, 7/22: Now that Talvin has hit the 4-month mark, things are getting even more serious. Sources say that the two are planning a trip to the UK, with a few days in Scotland, so that Taylor can meet Calvin's parents. (Eeek!)

But although this will be Taylor's first time meeting his fam, Calvin has already met Taylor's parents on this side of the pond. "Her parents love him," a source told Us Weekly. "They think he's the greatest."

"This is the real thing," the source adds. "Taylor spent a long time being single, waiting for the right guy like him."

Update, 7/19: Calvin Harris is putting it all out there when it comes to his feelings for Taylor Swift. After gushing about how well things are going for them, his infatuation is flowing full-force and showing no signs of slowing down any time soon.

Earlier this weekend in an interview with HITS Radio, Harris explained how different this relationship is from those he's had in the past, adding, "It's boxes I didn't even know existed, she ticks. It's really
ridiculous."

Update, 7/17: Calvin Harris is officially gushing-level smitten. During an interview with KISS FM, Harris was asked about his romance with Swift and gave, truly, the most adorable answer ever.

"It's going absolutely fantastic," he revealed.

Honestly, it's refreshing to see a star so openly in love, when usually celebrities are (rightfully) guarded about their dating lives. Maybe this means they really *are* moving in together?

Update, 6/29: Who doesn't love a celebrity relationship twofer? On the left side of the following Instagram, we've got Joegi, closer to confirmed coupledom than ever before. In the center, we have captain Karlie Kloss, who is probably grinning at her first mate/photographer Joshua Kushner. Finally, to the right, you will see two more young people in love.

Update, 6/22: Get ready to have that Temptations tune stuck in your head. After calling out Apple for their music practices—and changing them (NBD)—Taylor Swift received the best congratulatory tweet from her beau, Mr. Calvin Harris.

Update, 6/12: Not that we needed an anonymous source to tell us, but it *is* nice to know Talvin is firmly in the can't-live-without-you stage of their Instagram-official relationship.

Speaking to E! News, the tipster says the pair "are spending every free day they have together" before T embarks on her sold-out world tour, which has grossed $17 million so far. "Taylor feels very safe and secure with Calvin so she usually doesn't have her bodyguard around if Calvin is over," the source says. "Sometimes she will leave for a few hours and go on a hike with friends or go to a business meeting, but they always meet up again later in the day."

Also noteworthy: 1) Taylor is apparently planning to take her private jet to see Calvin during any breaks in her tour. And 2) they enjoy staying in and eating takeout. (See the juxtaposition there? #celebrities)

Update, 6/11: If an Instagram post doesn't make it official, we don't know what does. Tay posted a pic of her and her beau on a swan float (IDK, either) writing, "swan goals." This is a pretty big deal guys, as no other boyfriend has made it to the Insta feed. If floats could talk... #RelationshipGoals

Update, 5/27: Last night, Swift and Harris left her New York City apartment holding hands, headed for a date at L'asso in Little Italy. They make one fine-looking pair, if we do say so ourselves.

Original post, 5/18: All the rumors have been put to rest—Taylor Swift and Calvin Harris are officially dating. The couple, who met in February of 2015, held hands on the carpet of the Billboard Awards, and then straight up kissed—live, on-air, which we're pretty sure you don't do with just *anyone.*

(Side note: that kiss! Let Haim and Taylor explain our feelings for us:)

They also sat next to each other (duh), where they whispered sweet nothings into each other's ears and stared adoringly at each other. Just look at the evidence!

So that's that. CalTay? TayCal? What shall the internet anoint the new couple? Your guess is as good as ours.

And Harris? Pro tip: Just don't steal her scarf, okay? 1) That's shitty and 2) You will definitely be hearing about it. (Jake, just give it back already.)

Tumblr
Tumblr
Tumblr
Tumblr
Samantha Leal Senior Web Editor I'm Sam, the senior editor at MarieClaire.com.
This content is created and maintained by a third party, and imported onto this page to help users provide their email addresses. You may be able to find more information about this and similar content at piano.io
Advertisement - Continue Reading Below
More From Celebrity
The Queen Has a Rule Against Bad Talking Family
The Queen Took a Pic of Philip With Her to Funeral
Advertisement - Continue Reading Below
The Queen's Tolerance Was the Key to Her Marriage
J.Lo "Likes" Shady IG Post After A-Rod Split 👀
Beyoncé Shares Photos of Her White Power Suit
Will & Kate Welcomed Harry Back Into Their Group
Queen Left a Handwritten Note on Philip's Coffin
The Queen Said Grief Is the Price We Pay for Love
All of the Photos from Prince Philip's Funeral
The Queen Wore This Brooch to Philip's Funeral