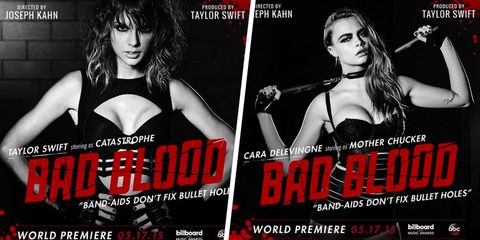 Update, 5/19:Hardy fall-taker Taylor Swift has posted another behind-the-scenes look at the making of her "Bad Blood" music video, and it is a blooper in which she crashes through a fake wall, then into a very real one.

Her sleek side pony stayed intact, though, and she eventually got it right enough for them to CGI, so not so #fail after all.

Update, 5/18: Like a band of hardened highwaywomen worn out after robbing a #squad best of 54 stagecoaches in one day, Taylor Swift and her 3,456,546 costars sat down to a fortifying meal of milkshakes and grilled meat circles served between bread. (Unless, you know, they ordered them protein-style.)

Observe the weaponry proudly displayed on the coffee table and the general aura of self-satisfaction from a Michael Bay homage well done. Did Mariska/Ellen/Cindy/Lena/Kendrick/Hayley/Cara/CALVIN take the photo? Did they have to name-drop...themselves...when they asked nicely for stickers? Did they wear the paper hats afterward? Okay. I'm done.

Update 3, 5/15: To no one's surprise, Cara Delevingne joins the already-packed party. As "Mother Chucker" because of the martial-arts weapon she is holding.

Update 2, 5/15: Gigi "Slay-Z" Hadid, after getting the go-ahead from Taylor Swift, spoke to the media about the forthcoming visuals for "Bad Blood."

When the video premieres during the Billboard Music Awards on May 17, we shall be confronted with "a lot of badass-ness—just the craziest thing you will ever see," the model told People last night. "I can't say much, but it's going to be epic."

In other news, Hadid interprets the lyrics as "kind of a play on not creating bad blood with the people around you, and it's cooler to be nice than to be mean." Sure—we can totally see the pacifism in "Now we got problems/And I don't think we can solve them." Also, "So don't think it's in the past/These kind of wounds they last and they last." And "Time can heal but this won't/So if you comin' my way, just don't."

Update, 5/14: K, Ellen Pompeo might seem like an even more random choice than some of the celebrities below—*cough* Kendrick Lamar *cough*—but, hello? Meredith Grey?

Update, 5/13: There is nothing more to say except "What the eff is this video?"

Besides a chance for Taylor Swift to wear fingerless gloves, that is.

Update, 5/12: Kind of a given, but it's not like there's any preferential treatment in Camp Taylor Swift, you know? #mutinyaverted

Karlie Kloss, Tay-Tay's best bestie, just got her own poster, and it's exactly the same as all the others except she's a supermodel.

Update, 5/11: When you're part of Taylor Swift's squad and she asks you to be in a music video, you can't just say no. This explains why every young, relevant celebrity working today (except Lorde) has been given a superhero persona, a Batman-ish glamour shot, and her own post on Swifty's Insta. Oh, Kendrick Lamar too.

Badass Zendaya, who will literally cut you if you look at her sideways...

Paramore's Hayley Williams, who might as well been renamed Aunt Flow...

And Kendrick "Why Are You Even Here" Lamar.

So...this is going to be a feature film? Can't wait!

Original post, 5/7: Early side-butt adopter Taylor Swift has given herself an alias, some vampire-show-type font, and a leather jacket in the first promo image for the "Bad Blood" music video.

From the photo posted this morning, we learn that Tay-Tay is now calling herself Catastrophe and styling herself after a certain samurai-like character from a Tarantino film with a rhyming name. Other details: 1) Joseph Kahn, who also directed her in "Blank Space," has reprised his role, and 2) their collaboration will premiere at the start of the Billboard Music Awards on May 17.

Now, given that both "BS" and "Style" were rather straightforward interpretations of the lyrics, can we expect Tay-Tay to include actual knives to the back? Spangled Band-Aids to stanch some very real-looking blood flow? Kind of doubtful because, ew, #offbrand, but fingers crossed she does hire a Greek chorus.

You Must See Everything Taylor Swift Is Wearing on Tour