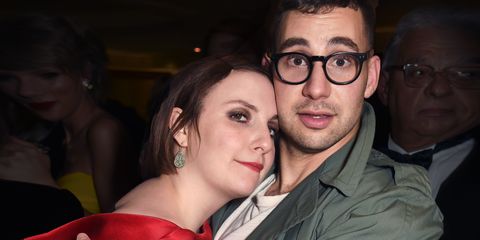 Vocal gay-rights supporter Lena Dunham said earlier this year that she refused to get married until same-sex couples all across the country had the same right. Which, in case you've managed to avoid the internet and any speaking human beings for the past four and a half hours, happened—to much exultant fanfare—today.

Because she is amazing/loves us, Dunham wasted all of, like, two minutes before giving longterm boyfriend Jack Antonoff the ol' yoohoo.

Woke up to learn that love is free! Thank you to all those who fought so hard to make this historic moment happen.

Next, an expectedly Dunham-y spin...

Weddings are about to get a lot less boring...

May we all enjoy this special period of time in which the internet sits on pins and needles until there is ring.

Jessica Pels Editor-in-Chief As the editor of Cosmopolitan, Jess oversees the editorial for all of Cosmo's efforts across print, digital, video, and emerging platforms.
Advertisement - Continue Reading Below
More From Celebrity
Tom Hanks & Rita Wilson Are Back in Los Angeles
Meghan Is Serious About Her Quarantine Precautions
Advertisement - Continue Reading Below
Angelina's Kids Are Making Most of Quarantine
Will Says COVID-19 Is a 'Life and Death Fight'
Chrissy Tweeted a Miles/'Tiger King' Photoshop
Sussexes Make Top Hire for New Charity Venture
Inside Harry & Meghan's First Days in LA
Meghan & Harry Reconcile With the Royal Family
Why Kate & William Are Keeping a Low Profile
Tracee Ellis Ross Posted the Best '90s Throwback