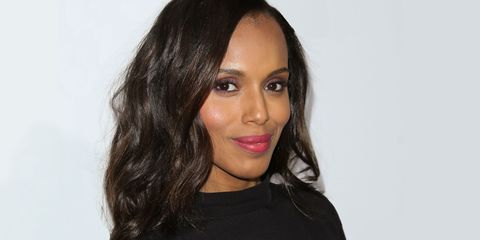 Kerry Washington is one busy lady. She's exec-producing (and starring!) in the Anita Hill film Confirmation, she's started filming season 5 of Scandal, she's raising her one-year-old daughter Isabelle, *and* she's working with Neutrogena to help more people stay safe in the sun (#ChooseSkinHealth). We caught up with the powerhouse to get the scoop on everything from her beauty routine to what we can expect from Fitz and Olivia this season.

We're so excited for 'Confirmation,' and you're exec producing this time around. How did the project begin?

"I guess I discovered the documentary first, and thought there was a movie there. Then, one of my favorite screenwriters of all time, Susannah Grant, who wrote Erin Brockovich, signed on. We've been developing this project for several years—before my daughter was even around. Susannah will joke with my daughter, 'I was talking to you when you were in your mommy!' It's been a longtime in the making!"

You recently tweeted that you were at the table read for the first episode of season 5 of 'Scandal!' What can fans expect?

"You know, Tony Goldwyn and I were talking after the table read just about how the last season you saw [*spoiler alert*] Fitz and Olivia getting it on on the Truman balcony, but we were just blown away by how that relationship is dealt with in the first episode back. It's exciting."

What other projects are you excited about?

"I'm excited about Confirmation, and I'm just really getting back to Scandal, but I do have some stuff cooking on the stove—but I can't quite say yet. I will say that with Confirmation I just fell in love with producing and I want to really start working on developing more projects—not for me to act in. I really love that storytelling part of it."

What's your biggest must-have when it comes to summer beauty?

"For me, having a really efficient SPF under my makeup that's not my greasy and won't cause my makeup to run or discolor it is key. I want to be protected but I also don't want to look like I'm melting. I wear Neutrogena's Ultra Sheer sunscreen.

In the summer, I like to avoid the matte lipstick. I want something that's not fussy—give me something sheer and easy. Not to sound like a broken record, but Neutrogena's MoistureSmooth Color Stick in Bright Berry and Rich Raisin are my favorites."

Do you have any beauty rituals—something you never skimp on?

"I've always tried to take the best care of my hair. We use so much heat as a part of my job—heat tools, curling irons, and then the hairsprays and the serums, and then the flying out all the time and swimming with my daughter...it's a lot. I try to do a mask/deep-conditioning once a week. (Try: Neutrogena's Triple Moisture Deep Recovery Hair Mask.) I'm committed to it."

Whose style in Hollywood are you loving right now?

"Oh man, so many. I love Taraji P. Henson's style, so fierce and fabulous with a capital F. I always always love Lupita Nyong'o, and I think Zoe Kravitz has been looking great."

There are so many beauty trends out there right now—is there any trend happening now that you've seen and you thought, "I need to try that!"

"I've been filming Confirmation which takes place in 1991, so it's like I've been living in a cave. I'm coming out of that so right now I'm just like 'what's going on?!'"

Speaking of years past, is there anything style-wise or beauty-wise that you look back on and think, "What was I doing?!"

"Hah! Not really, I have to say. I feel like those choices were made in a context—and now, looking around after filming Confirmation, I realize we're doing the same thing—high-waisted jeans, etc."

"In the movie, I would always fold my socks down. Remember doing that with ankle socks?! I'm glad we didn't bring that back. But it was good for the movie!"