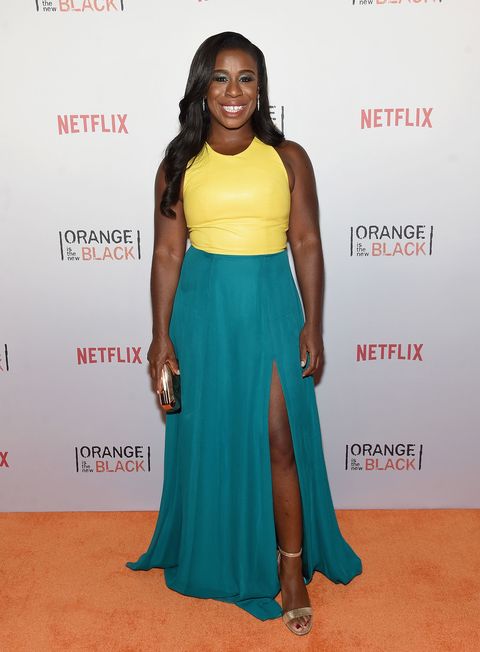 Update, 8/7: This bit of news has made us *that* much more excited for the newest adaptation of The Wiz: Uzo Aduba will be starring as Glinda the Good Witch, because everything is as it should be.

Just to recap: Mary J. Blige, Queen Latifah, Uzo Aduba, and Amber Riley are all cast THUS FAR. Who will be next? *Jumps up and down with excitement.*

Update, 8/4: Excuse me for mixing musicals here, but this bit of casting news from The Wiz is *such* a Cinderella story it can't be helped.

As it was announced on Today this morning, 18-year-old Shanice Williams has landed the part of Dorothy in NBC's live production, beating out hundreds of applicants. The network held a nationwide open casting call for an African-American woman with an "extraordinary voice" and a "youthful energy," in which candidates had to sing three songs from the original musical.

The Wiz will be Williams's first TV role.

Update, 7/30: Could it be? Mary J. Blige, Queen Latifah, and now...Beyoncé? That's right—the Queen B herself is reportedly in talks to star as Glinda the Good Witch in the musical adaptation of The Wiz.

While the casting has yet to be confirmed, it seems Bey is a top contender, according to E!. But if she passes, there's another potential hopeful that is also being mentioned/is on the Short List—Orange is the New Black's Uzo Aduba.

Honestly, this could be the musical of our dreams. For now, let's travel back to yesteryear, when Beyoncé performed "Home" from The Wiz in a talent competition when she was just seven.

The NBC production—which will air December 3—follows live musicals Peter Pan and the Sound of Music, which were eagerly anticipated and widely criticized in equal measure. Hey, it's hard to do a live musical, people. *former high school theater kids not in agreement*

Queen Latifah will play the role of the Wiz (was there any doubt?), while Blige will be the Wicked Witch of the West, reveals the Hollywood Reporter. Stephanie Mills, who starred as Dorothy in the original Broadway production, will play Aunt Em.

No Dorothy yet—but we'll be back with an update the second we hear.

For a little taste of what's to come, revisit the 1978 movie version (starring Diana Ross and Michael Jackson) with this trailer:

This content is imported from YouTube. You may be able to find the same content in another format, or you may be able to find more information, at their web site.
Samantha Leal Senior Web Editor I'm Sam, the senior editor at MarieClaire.com.
This content is created and maintained by a third party, and imported onto this page to help users provide their email addresses. You may be able to find more information about this and similar content at piano.io
Advertisement - Continue Reading Below
More From Celebrity
See the Royals Socialize at a 1991 Cocktail Party
Eugenie's Pics from Inside Harry and Meghan's Home
Advertisement - Continue Reading Below
Queen Trolled Tourists Who Didn't Recognize Her
Blake and Ryan Recreated Their First Date on IG
Charles Expertly Ignored Boris Johnson's Snafu
How Kitty Spencer's Wedding Dress Honored Diana
Dolly Parton On the #FreeBritney Movement
Will & Kate Are Nervous About George's Future
George Won't Be Forced to Go to Boarding School
Diana Would Have Written a Memoir Too, Friend Says