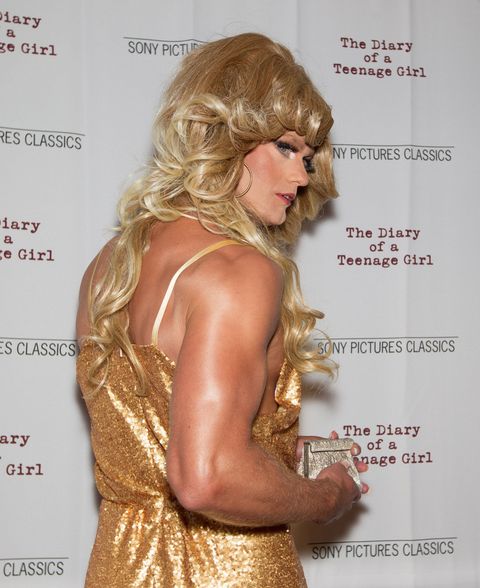 Update, 8/6: New favorite human Alexander Skarsgård gave an interview to BuzzFeed on Wednesday in which he explains why he showed up to the premiere of Diary of a Teenage Girl in full drag. (Not that any of use were questioning it after we saw the photos, right?)

The way he tells it, he became close friends with some drag queens who worked on the movie and didn't want to be excluded from the "big, fun drag queen after-party." So Mercedez Munro transformed him into Farrah Fawcett—becoming his drag queen mother, a fact he seems very proud of—and Alexander Skarsgård was reborn...Lady Libido Lushbody.

"BUT WHY DIDN'T THEY MAKE A VIDEO OF THIS?!" said all of us. Probably so we could watch that last, conveniently subtitled GIF over and over again. #blessed

Original story, 8/4: It's well established that Alexander Skarsgård looks hot on a daily basis. But it turns out that he can put on a giant blonde wig and a sequin gown and still look stunning. Not fair!

E! News reports that the actor hit the red carpet for his new movie, Diary of a Teenage Girl, in head-to-toe drag. It may have been a tribute to costar Joshua Grannell, who frequently performs in drag as Peaches Christ. Grannell plays a transvestite in the film, and Skarsgård has also donned women's clothing for the Swedish movie Kill Your Darlings and on True Blood.

To refresh your memory, here's what he looks like in what RuPaul calls "boy drag":

And here he is, tanned to perfection on the red carpet. It's an incredible transformation.

Side note: If he's auditioning for Hedwig and the Angry Inch, it's a great strategy. (Also, where do we get tickets?)

This content is created and maintained by a third party, and imported onto this page to help users provide their email addresses. You may be able to find more information about this and similar content at piano.io
Advertisement - Continue Reading Below
More From Celebrity
The Queen Took a Pic of Philip With Her to Funeral
The Queen's Tolerance Was the Key to Her Marriage
Advertisement - Continue Reading Below
J.Lo "Likes" Shady IG Post After A-Rod Split 👀
Beyoncé Shares Photos of Her White Power Suit
Will & Kate Welcomed Harry Back Into Their Group
Queen Left a Handwritten Note on Philip's Coffin
The Queen Said Grief Is the Price We Pay for Love
All of the Photos from Prince Philip's Funeral
The Queen Wore This Brooch to Philip's Funeral
Kate Middleton's Nod to Diana at Philip's Funeral