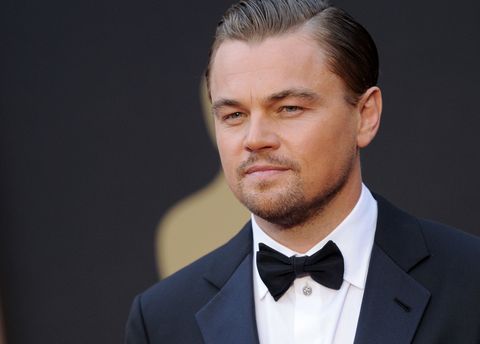 Leonardo DiCaprio, early adapter of the man bun, just revealed that he slept in an animal carcass while filming Alejandro González Iñárritu's The Revenant, which sounds like a totally normal and sanitary thing to do.

The 40-year-old heartthrob—whom you might remember from Titanic and your daydreams—plays a frontiersman who goes on a vigilante mission after some of his fellow fur trappers rob him, murder his son, and leave him to die from injuries sustained during a bear mauling. (IT'S BASED ON A TRUE STORY.) Suffice it to say, both said mission and the filming process were the actual worst.

"I can name 30 or 40 sequences that were some of the most difficult things I've ever had to do," DiCaprio told Yahoo. "Whether it's going in and out of frozen rivers, or sleeping in animal carcasses, or what I ate on set. [I was] enduring freezing cold and possible hypothermia constantly."

So while you were frolicking in a pumpkin patch while drinking a PSL, DiCaprio was taking one for the team by using dead animal bodies as sleeping bags and eating raw forest critters.

"I certainly don't eat raw bison liver on a regular basis," he said. "When you see the movie, you'll see my reaction to it, because Alejandro kept it in. It says it all. It was an instinctive reaction."

Someone give this man his Oscar before our memories of Pre-Carcass-Sleeping Leo are gone forever.

Get a sneak peek of The Revenant below.