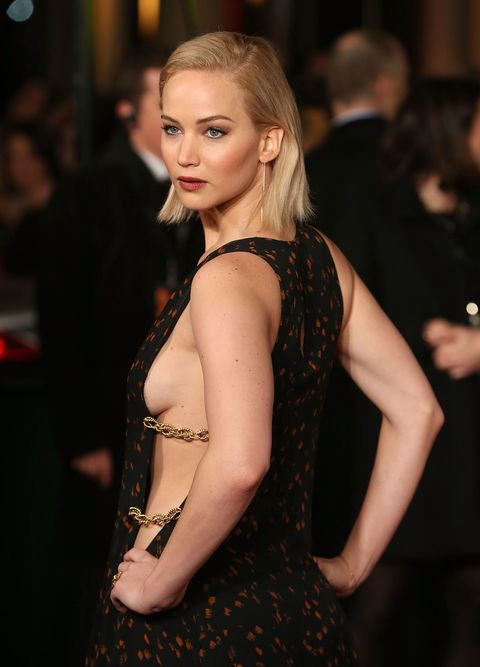 Are you single AF? Has "literally zero magic happened" in your bedroom for a year? Girl, Jennifer Lawrence knows *exactly* how you feel.

In a typically DGAF interview (she whips off her bra in front of the reporter), this time for Vogue's December issue, the Joy actress covers all the important stuff, from marriage to screaming at David O. Russell to Michael Fassbender teaching her how to make dirty martinis. Here, we give you only the need-to-know facts from her brilliant cover story.

"No one ever asks me out," she said as everybody gasped. "I am lonely every Saturday night. Guys are so mean to me. I know where it's coming from—I know they're trying to establish dominance—but it hurts my feelings. I'm just a girl who wants you to be nice to me. I am straight as an arrow. I feel like I need to meet a guy, with all due respect, who has been living in Baghdad for five years who has no idea who I am." Same. Kinda.

After moving into a Beverly Hills home previously owned by Jessica Simpson (it has a glam room!), she has befriended some of her famous neighbors, some of whom can't get rid of her even if they tried. "I've got a bunch of friends who live really close, thank God. And I've made friends with Mila and Ashton, two doors down. They're awesome. I go over there uninvited. They're probably getting pretty sick of me."

Instead, you call her the "lady who makes me embarrassed to be from Kentucky." In the interview, Lawrence goes on a rant about "all those people holding their crucifixes, which may as well be pitchforks, thinking they're fighting the good fight. I grew up in Kentucky. I know how they are."

Pepperoni, jalapeños, and ranch on the side, to be precise.

The only good thing that came out of the nude-photo leak was her dog, previously her mom's dog

"I was outside crying, and Pippi jumped up on my lap and started licking up all my tears, and I couldn't put her down for hours. And I mean, hours. I was like, 'Well, obviously, you're mine.' " She says the episode "was all pain and no gain," but she doesn't "dwell on it unless someone brings it up."

No names were named (bummer), but she does mention a "sexy" ex who was, in the end, too sexy. "I didn't like how he made me feel. When someone makes you insecure, it's strangely exhilarating because you keep trying to fight for that validation. It's what you want to have before you get married, so that you don't seek it out once you are." Speaking of marriage, Lawrence "can't wait" to settle down one day. "I feel like if I find that one person who I want to spend the rest of my life with, who I want to be the father of my children, that I would absolutely not f*ck it up. But I'm also not banking on that."

Chelsea Peng I'm Chelsea Peng, the assistant editor at MarieClaire.com.
This content is created and maintained by a third party, and imported onto this page to help users provide their email addresses. You may be able to find more information about this and similar content at piano.io
Advertisement - Continue Reading Below
More From Celebrity
Kate Beckinsale Shows Abs In Bikini Video
Natalie Portman Reacts to Hemsworth's Muscles
Advertisement - Continue Reading Below
The Scooter Braun Dig in Ryan Reynolds' New Ad
Eugenie Shopped at Kate's Favorite Maternity Store
J.Lo's Ex Told Her to Get Botox at 23
Miley Said She and Liam Had "Too Much Conflict"
Prince Charles' Life in Photos
Prince George's Favorite Meal Is Very Grown-Up
Selena Felt "Bullied" by SBTB's Kidney Jokes
The Queen and Philip Are Breaking Royal Tradition