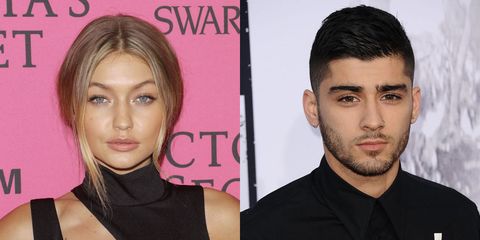 Update, 11/29: Gigi Hadid and Zayn Malik were spotted holding hands as they exited The Nice Guy in West Hollywood after a date last night. While anonymous sources have claimed the two are "super into each other," the pair's tasteful PDA seems to finally confirm their newly-minted relationship. Because being photographed fingers interlocked is basically the Hollywood equivalent of making things Facebook official, right?

This content is imported from Third party. You may be able to find the same content in another format, or you may be able to find more information, at their web site.
Update, 11/25: It seems things are heating up for the former One Direction member and model. According to Us Weekly, the two are "equally super into each other, texting each other all the time." Though they have only been dating a couple of weeks, their relationship seems to be on the up and up.

"He thinks she's so hot. He takes interest in her shoots and videos she does," an insider says. "He thinks she's sweet, too. She talks about her mom a lot and her family, and he likes that."

According to the same insider, Gigi has already met Zayn's friends and "drinks beers with the guys. She's cool and funny."

Original story, 11/23: Model Gigi Hadid has moved on from her relationship with Joe Jonas and is reportedly dating former One Direction member Zayn Malik. Please be careful on the internet for the next 24 hours, as the 1D fandom will likely be having a collective breakdown.

Us Weekly reports that Gigi and Zayn, spotted together after the AMAs last night, are keeping things casual—a source said "it's a very new thing" and "they're just seeing where it goes."

"I wouldn't call them boyfriend and girlfriend," another source explains. "But seeing each other? Definitely. He's chuffed." (Chuffed = English for 😍, for the uninitiated.)

Meanwhile, the remaining One Direction members are just like:

Mehera Bonner Contributor Mehera Bonner is a news writer who focuses on celebrities and royals—follow her on Instagram.
This content is created and maintained by a third party, and imported onto this page to help users provide their email addresses. You may be able to find more information about this and similar content at piano.io
Advertisement - Continue Reading Below
More From Celebrity
Twitter Blasts Media's Targeting of Duchess Meghan
Palace Is Looking Into Meghan Bullying Allegations
Advertisement - Continue Reading Below
Meghan & Eugenie Are Still Close After Royal Exit
Harry's Oprah Interview Suit Is a Nod to Archie
Ryan Seacrest's Relationship History, Explained
Angie Sells Painting from Brad for $11.5 Million
Meghan and Harry Blame the Palace for New Article
Serena Williams & Daughter Pose for First Campaign
Britney Spears Shares Rare Photo of Sons on IG
Kim Kardashian Fell Asleep Mid-Glam