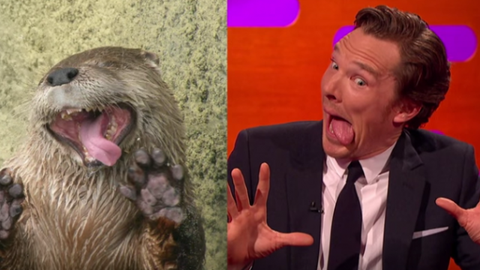 Somebody give Graham Norton and his photo-research team medals for services rendered to the internet's cache of Benedict Cumberbatch-as-otter memes.

During an appearance on the BBC program to promote Black Mass, the chill dad continued the time-honored tradition of Benedict Cumberbatch matching his facial expressions to those of an aquatic mammal while his costar Johnny Depp showed concern for the Tumblr youths. But where do the oversize teddy bear and the kiss that launched a thousand more fan-fics come in? Find out below.

Chelsea Peng I'm Chelsea Peng, the assistant editor at MarieClaire.com.
Advertisement - Continue Reading Below
More From Celebrity
Kylie Threw Stormi the Most Elaborate Party
Chrissy and John Had a Post-Grammys Dance Party
Advertisement - Continue Reading Below
Selena Gomez Sent an Emotional Note to Demi Lovato
Nick Jonas Had Food In His Teeth at the Grammys
Why Isn't Beyonce at the 2020 Grammys?
Watch Demi Lovato's Emotional Grammys Performance
Beyoncé's Pre-Grammys Look
Blake and Gwen Were Too Cute at the Grammys
The Jonas Brothers' Grammys Performance Was a Lot
Alicia Keys Covers 'Someone You Loved'