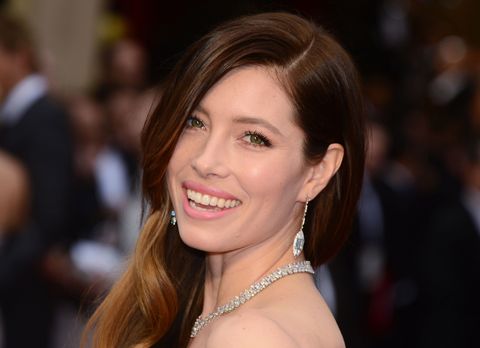 Ingénue. Girlfriend. Wife. Mother. And according to Esquire magazine, Sexiest Woman Alive. Jessica Biel has had many labels in her 33 years, but now, she's choosing her own: indie actor, producer, and head of a production company.

We caught up with Biel at perhaps the most interesting turning point of her life, as she—one of the world's great beauties/wife of superstar Justin Timberlake/first-time mother to 8-month-old son Silas—embarks on the role she's been preparing for her whole career: A Force to Be Reckoned With.

Biel's new film, Bleeding Heart, was written and directed by award-winning filmmaker Diane Bell, who was selected for the Sundance Screenwriting Lab. Bell said she "wanted to make a movie that celebrated strength in women and in sisterhood" rather than portraying females as victims. Biel plays May, a yoga teacher living a tranquil lifestyle until she meets her biological half-sister, Shiva (Zosia Mamet) for the first time. Shiva is entangled in an abusive, dangerous relationship which she mistakes as love. May is determined to empower Shiva to value herself enough to leave her boyfriend. When May tells her sister that she loves her, Shiva replies, "Girls don't count." Biel's nuanced and kickass performance demonstrates that in fact, girls more than count.

We chatted with Biel about finding her power in her relationships with men, finding time for herself as a new mom, finding her voice among Hollywood's women power players, and finding out what it's like to be Timberlake's boss.

Marie Claire: What interested you about portraying this character?

Jessica Biel: I was intrigued by this woman who cultivated a life for herself with really strong convictions and she meets a person who is connected to her by blood and it changes everything. Everything she thought and every opinion she had kind of gets washed clean. Going from a character who lived the Ashtanga yogic lifestyle, which is about nonviolence and treating every being on earth with respect and kindness, and going to the extreme [violence] that she goes to, that was very interesting. I was curious about a person who does that, as her convictions change.

MC: We see her evolution reflected in her hair, clothes, makeup. What was that internal process like?

JB: I think internally she was like an onion in a sense, stripping away the built-up ideas of who she wanted to be and how she wanted to exhibit those in the world. When she meets Shiva, who is unapologetic, unabashed, honest, raw, truthful, May begins to feel that she herself is a bit of a fraud. May's boyfriend and the life she's created is not fitting her and she hasn't understood that until she meets Shiva, who is really the trigger point for that stripping away of the BS that May created in her life.

JB: I think that as a young woman—and I think probably most young women have experienced this—you're dating someone and maybe they either have a stronger personality than you or you look up to them, you respect them so much, that it's just easy to just sort of go along. I feel like I did that in my young life, you know? I've dated people and kind of—went along with what they wanted to do, what they said, because I was, number one, a little more laid back and didn't really care, and two, you want to please people when you're younger. At least I did. I really struggled with that—with what I really felt comfortable doing and what I did, because I wanted to make other people happy or feel good. So I was able to draw from a lot of my younger life. As I was working on May, I understood her struggle—trying to make everybody feel good and please everybody and really putting herself last, which is what she does through most of the film, until she finally gets some ground under her feet.

"As I was working on May, I understood her struggle—trying to make everybody feel good and please everybody and really putting herself last."

MC: What's it like for you now, being a new mom and balancing your baby's needs, your husband's needs, and your needs as an artist?

JB: This is probably an issue that every parent, especially every mother, experiences, forever! There's just so much going on when you have a child, as they really start to become a person, and it's a constant battle, because of the struggle to sort of take turns of who comes first—how do you balance your home life, work life, social life and your own independent private life? I don't have the answer to that and I will probably continue to spend the rest of my life trying to find that balance. And it all relates back to May—that struggle for her is the same for a new mom or dad, or for a person in a relationship. It is all very similar. I'm personally experiencing it now in a totally different, way more complicated way. It's really hard to find time for me, where I say, 'You know what? It's my time now and I'm number one today.' It's never really happens!

MC: Sexiest woman alive. Ingénue. Have those labels limited the range of roles available to you?

JB: I feel like most women in this industry come upon some sort of struggle when it comes to their physicality, the way they look. I believe it's every actress's job to hold out for the good stuff. To really say, 'okay, I appreciate these accolades, I thank you, but I had nothing to do with that.' When someone gives you a nice compliment on how you look, it's really: thank you Mom and Dad—it's nothing that I can take ownership of; nothing that I've worked for and earned respect for. There are always going to be the roles where you play the arm candy or girlfriend or wife; sometimes those are actually great parts, too, but I think it's important to fight for the roles that really mean something to you, that say something. To tell stories that inspire you. You have to find those parts that are fewer and far between.

"When someone gives you a nice compliment on how you look, it's really: thank you Mom and Dad—it's nothing that I can take ownership of; nothing that I've worked for and earned respect for."

MC: Choosing a role like this, starting your own production company (Iron Ocean Films), producing your own upcoming film – you are coming into your own as an artist, as part of the growing movement in Hollywood for women to take the reins and tell stories in their own voices and not rely on the studio system to find those stories for them.

JB: It's up to us to scrounge through the depths of piles of scripts to find those biographies and characters and stories to tell from a woman's perspective. It's important because women are half the population and we have a lot to say. As you get older and step away from the ingénue roles in your mid-twenties and continue to grow through roles as girlfriends and wives and mothers, it just feels so much more important to me to fight the good fight and find the projects that you really care about, even if they're really small. If no one wants to make them, find the money or finance them yourself. Don't just wait around for something to come to you. If you have an idea, write it yourself. What you're talking about is stepping into the position of power and control. I honestly think it's the only way I would continue to stay excited throughout my whole career—if I could find and develop material for myself and for other women. Otherwise it's a hard business, because those really meaty, gritty roles are so few. Also you have to work in other formats, like television, which has become an amazing place for women.

MC: Callie Khouri comes to mind because in many ways, Bleeding Heart reminds me of Thelma and Louise [for which Khouri won the Oscar for Best Original Screenplay]. Now she's the creator and executive producer of the network series Nashville, which has several great roles for women. What was it like being a first-time producer on your upcoming film, The Devil and the Deep Blue Sea?

JB: It was a very, very challenging experience. We've been working on this film for nine years. We'd get an actor; we'd lose them; it became almost comical. I'm not necessarily the best producer at being on-set and having to deal with the hardcore problems. I learned that my partner Michelle Purple is impressive at those management skills. I'm better at the creative side: working with the actors, the writers and director—do we need more takes, etc.? Also I liked working in the development stages. It's was really interesting to sort of look at myself and be honest about what I was good at and where I needed to work on myself. I'm so over the moon that we actually did it; I can't believe that we actually did it!

"I honestly think it's the only way I would continue to stay excited throughout my whole career—if I could find and develop material for myself and for other women."

MC: Would you ever like to act together with Justin in a film?

JB: I think we'd love to work together at some point if it makes sense, if we ever found the right piece—because you have to be careful about that. It has historically sometimes gone very wrong!

MC: Justin composed the score for The Devil and the Deep Blue Sea. What was it like working with your husband?

JB: Of course the music sounds incredible. It's something he's never done before, so he went through understanding what this new format was for him. It came along beautifully, and the music made the film emotional in the right spots and drives it in the right spots and makes you laugh. His score actually changes the film. We worked together very well. I was on set producing and working and acting and he really only came to visit; he wasn't an actual part of the everyday kind of grind and pre-and post-[production]. We weren't involved in that daily sense so it was a nice removal. When it was time to do music, he basically stepped in and took over. Michelle and I were there to support him and make sure he got what he needed. It was really kind of a perfect dynamic. It was very interesting working with him in that capacity because, in a sense, I was kind of his boss [laughing]. It was funny; I enjoyed that a little bit!