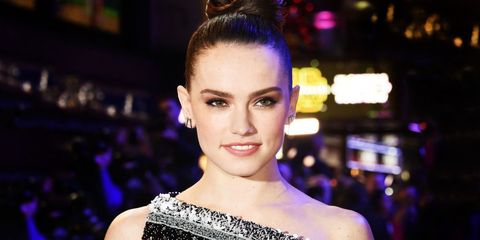 "Star Wars: The Force Awakens" made a whopping $247 million its opening weekend, which means pretty much everyone and their brother saw Daisy Ridley's badass big-screen debut. But, before the force was with her, the British actress was co-starring with a pork pie in a commercial, she reveals in her December Elle cover story. Here are 11 things we learned about Ridley from the revealing interview:

1. She was fired from her first job.

"I was actually sacked from my first job," says Ridley, who studied musical theater at the Tring Park School for the Performing Arts. "It was at a workshop for a short film this poet had written, about when she used to work in a strip club. After the first week, I was told not to come back."

2. Her first acting gig was far from glamorous.

It was a commercial that had her, "eating a pork pie in a way that has never seen anyone so happy," she says.

"I heard all sorts of famous people were being seen for it," Ridley says. "But then a friend got an audition, so I knew they were interested in an unknown. I immediately got this weird feeling all over my body. I knew I had to be seen for it."

4. She worked her butt off to get ready for the role.

For three months, her diet consisted of "lots of fish, legumes, and spirulina shakes," and she spent five hours a day, five days a week at the gym training.

5. Her family can't keep a secret.

"I couldn't tell any of my friends," she says about her top-secret role. "I told my mum and my sisters—then my sister told her boyfriend, and my mum told her friend. I was like, 'Great, guys—you are great.'"

"Maybe I should pretend like I'm not insecure," she says. "But I really am. This movie is going to come out and…will people like it? Will they like Rey?"

7. Sparks flew when she was filming — literally.

"There was one day on set when some sparks went off around her, and one went down her back and burned her a little," Abrams said. "It was more scary than it was physically painful, but she took a minute, shook it off, and we were back up and running in 15 minutes."

8. She is seriously brave.

"We were told about this scorpion in Abu Dhabi that, if it stabbed you, you needed treatment within half an hour," Ridley says. "There was this bit where I was lying in the sand, and if a scorpion got me, the nearest hospital was an hour away. So I was like, I could die right now. I could be dead in half an hour." Luckily, no scorpions showed up that day.

9. Her dad and Harrison Ford have something in common.

Her photographer father has the same little gold hoop earring that Ford has.

10. After the six month shoot which took her everywhere from Abu Dabi to Iceland, she just chilled for a bit.

She says the last two months have consisted of "cuddling with my dog and baking cakes."

11. She was a late-blooming 'Star Wars' fangirl.

She admits she wasn't the world's biggest Star Wars fan as a kid. "I don't think it's because I'm a girl. It's just that no one in my immediate family was really a big fan," she says. But now she's totally onboard. "I have gone back and watched all the movies, multiple times."

Kate Storey Esquire Writer-at-Large Kate Storey is a Writer-at-Large for Esquire covering culture, politics, and style.
This content is created and maintained by a third party, and imported onto this page to help users provide their email addresses. You may be able to find more information about this and similar content at piano.io
Advertisement - Continue Reading Below
More From Celebrity
Prince Charles' Life in Photos
Prince George's Favorite Meal Is Very Grown-Up
Advertisement - Continue Reading Below
Selena Felt "Bullied" by SBTB's Kidney Jokes
The Queen and Philip Are Breaking Royal Tradition
Harry Said Becoming a Father Changed "Everything"
This Ellen and Justin Interview Is Very Awkward
Umbrella Academy's Elliot Page Comes Out as Trans
Princess Diana's Butler Talks 'The Crown'
J.Lo Twins with Her Mom in Sweet Holiday Selfie
Kate Rewore a Dress With a Sentimental History