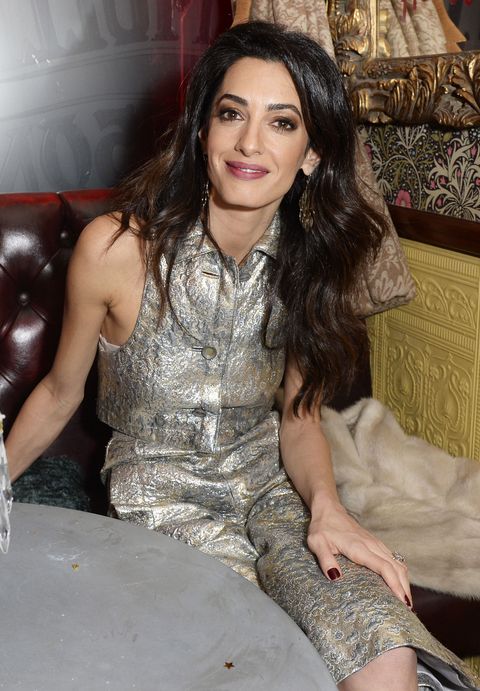 It wouldn't be an interview with top human rights lawyer Amal Clooney without a few questions about her trophy husband George, but at least in this one—her first on U.S. television—they talk about how she's trying to prevent the Maldives from becoming an extremist state that churns out ISIS recruits at the highest per capita rate in the world.

But back to the stuff that's not about bringing democracy to a nation that only knew it briefly before its president was overthrown and jailed. "I think it's wonderful that celebrities would choose to spend their time or energy or, you know, the spotlight that they have to raise awareness about these causes," she said when NBC News's Cynthia McFadden brought up her newfound fame. "I don't really see myself in the same way because I'm still doing the same job that I used to do before."

For more on her work to free deposed democratic leader Mohamed Nasheed and a John McCain cameo that would make Leslie Knope weep, watch the video below.

Chelsea Peng I'm Chelsea Peng, the assistant editor at MarieClaire.com.
This content is created and maintained by a third party, and imported onto this page to help users provide their email addresses. You may be able to find more information about this and similar content at piano.io
Advertisement - Continue Reading Below
More From Celebrity
Meghan Discussed Her Daughter in Vax Live Speech
Prince Harry Talks Digital Pandemic at Vax Live
Advertisement - Continue Reading Below
Harry and Will Have Been Arguing for Months Now
Prince Harry Doesn't Regret His Oprah Interview
Archie Has a Distinct American Accent, Apparently
Hailey Wore a Nude Blazer and Micro Dress
Gabrielle's TikTok About Her Prom Date is So Funny
Victoria Beckham Shuts Down 'Spice World 2' Rumors
Kendall Jenner Shared Her Experience of Anxiety
'The Voice' Star Blake Shelton Opens Up About Gwen