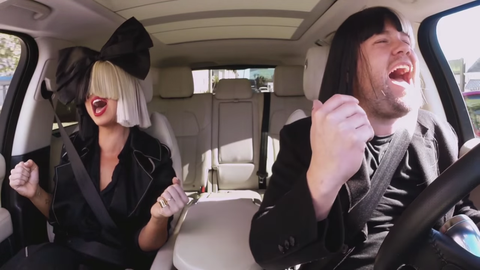 The singer and her wig showed up for a ride around Los Angeles with James (also in a wig, FYI) and they sang everything from "Elastic Heart" to "Diamonds." Obviously, Sia had some trouble actually getting into James' car due to the massive Cruella De Vil fringe covering her eyes—but there's an explanation.

"I was an alcoholic and a drug addict, and I sobered up and decided I didn't want to be an artist anymore because I was starting to get a little famous, and it was destabilizing in some way," she explained. "I thought, 'What doesn't exist in pop music at the moment?' And it's mystery."

True that. Watch James and Sia's hang session below, where they discuss everything from Sia's ability to hold eggs (just go with it), to her belief in aliens. "I watched a video of the ex-Canadian minister of defense just saying plainly he knows for a fact that the American government are working with five different alien races," Sia told James, who was just like 😱. "My blood ran cold."

The truth is out there. Sia says so.

Mehera Bonner Contributor Mehera Bonner is a news writer who focuses on celebrities and royals—follow her on Instagram.
This content is created and maintained by a third party, and imported onto this page to help users provide their email addresses. You may be able to find more information about this and similar content at piano.io
Advertisement - Continue Reading Below
More From Celebrity
J.Lo Wore Head-to-Toe Chanel for the Inauguration
The Queen Sent a Private Message to Joe Biden
Advertisement - Continue Reading Below
Lady Gaga's PDA with Boyfriend Michael Polansky
Twitter Reacts to Lady Gaga at the Inauguration
Lady Gaga Gave a Powerful Inauguration Performance
Lady Gaga Brings the Drama to D.C.
Chrissy Accidentally Spilled Inauguration Secrets
Meghan's Lawyers Slammed Publication of Her Letter
William's Private Secretary Quits After 10 Months
The 50 Most Popular Episodes of ‘Friends,’ Ranked